Governor Rick Scott announced that Florida’s high school graduation rate has reached a 15-year high according to data released today by the Florida Department of Education. For the 2017-18 school year, Florida’s statewide graduation rate rose to 86.1 percent, an increase of 3.8 percentage points over last year and 17.1 since the school year before Governor Scott took office.

Governor Scott said, “I am proud to announce that Florida’s high school graduation rate has once again risen and has reached an all-time high. Access to quality public education played a critical role in my life, and as a father and grandfather, it has always been important to me that every Florida student has the opportunity to pursue their goals and achieve the American Dream. This accomplishment would not be possible without the hard work and dedication of Florida’s teachers and school administrators. I’m also proud of the work we’ve done to provide record amounts of funding to Florida schools so they can continue to deliver results. I will never stop working to ensure students are prepared to succeed.”

Commissioner of Education Pam Stewart said, “I could not be more proud of Florida’s students and their educators who have demonstrated unrivaled dedication to excellence. As commissioner, I vowed to be a voice for the voiceless, and that often meant advocating for minority and low-income students whose performance historically fell below that of their white counterparts. Today’s announcement is particularly important because it not only shows across-the-board progress, it highlights success in closing the achievement gap and leveling the playing field for all students.” 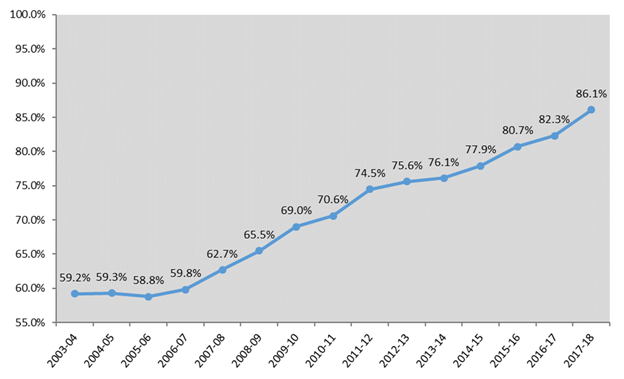 Florida’s graduation rates vary by race/ethnicity. All but one group increased their graduation rates over the past year. The subgroups with the highest percentage point increase over the last five years are as follows:

For more information about the 2017-18 graduation rates, click here.