“I am deeply honored to serve the citizens of this great state as Florida’s 38th Attorney General,” said Attorney General Moody. “As Florida’s top legal officer, I will seek justice for all Floridians, defend the rule of law and protect our State and our citizens from crime and fraud.”

Attorney General Moody was sworn in by her father, James S. Moody, Jr., a Senior United States District Judge for the Middle District of Florida. The Bible she took the oath of office upon is the same Bible that her paternal grandfather, James S. Moody, Sr., took the oath of office on when he was sworn in as the presiding judge in the 13th Judicial Circuit Court of Florida in 1957. 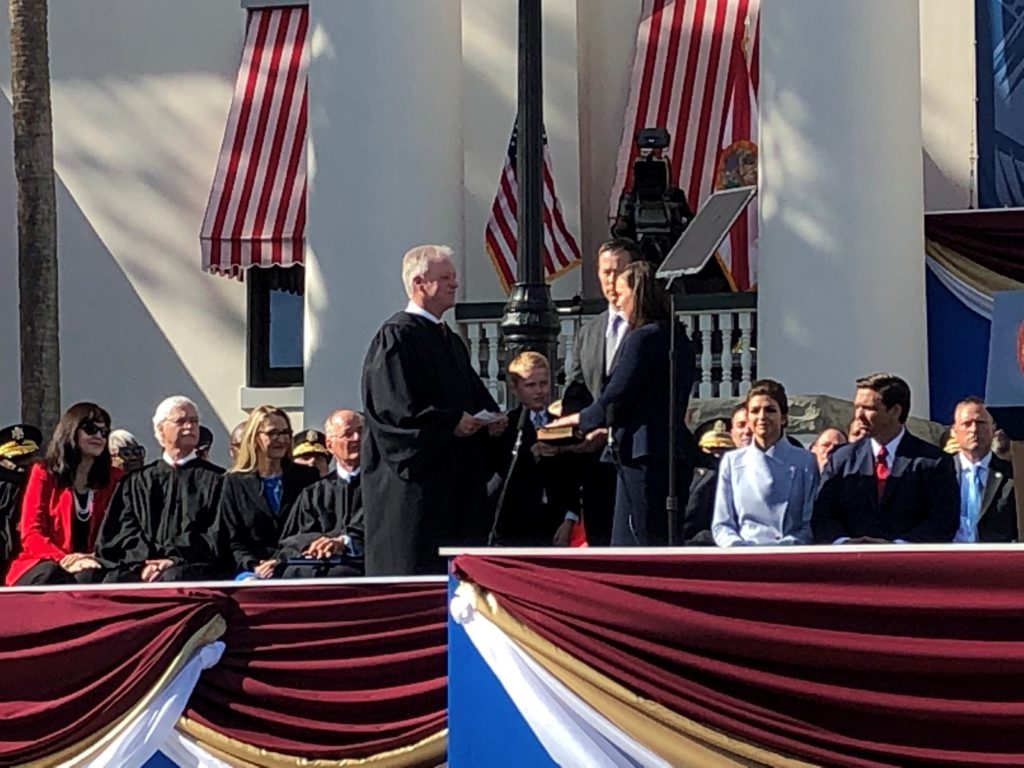 Attorney General Moody, a fifth-generation Floridian, previously served as a circuit court judge in Florida’s 13th Judicial Circuit in Hillsborough County. Prior to serving on the bench, Moody joined the United States Attorney’s Office prosecuting drug, firearms and fraud crimes. The United States Drug Enforcement Administration commended Moody for her prosecutorial excellence and outstanding initiative in drug law enforcement for her work as a federal prosecutor. The Florida Department of Law Enforcement also recognized her work as the lead prosecutor of Operation Round-Up, a targeted prosecution of violent and repeat offenders.

As a judge, Moody founded the Attorney Ad Litem program to recruit volunteer attorneys to stand in place of parents who did not appear in court with their children. She also developed a mentoring program for at-risk children in the juvenile delinquency system. In 2015, the National Legal Services Corporation recognized Moody for her significant contributions to pro bono legal service and awarded her the Florida Supreme Court’s Distinguished Judicial Service Award.

Moody was born and raised in Plant City. She attended the University of Florida, where she earned her bachelor’s and master’s degrees in accounting and her Doctor of Jurisprudence degree. She later earned a Master of Law in International Law from Stetson University College of Law.

An official photo of Attorney General Moody can be found here.

Taking the oath of office as Florida’s Attorney General:

“I Ashley Moody do solemnly swear that I will support, protect, and defend the Constitution and Government of the United States and the State of Florida; that I am duly qualified to hold office under the Constitution of the State, and that I will well and faithfully perform the duties of Attorney General on which I am now about to enter, so help me God.”