At today’s meeting of the Florida Cabinet, Commissioner Nicole “Nikki” Fried announced her new “Veteran of the Month” initiative, recognizing veterans who have gone above and beyond in agriculture or service to fellow Floridians.

First Sergeant Mary L. Lester, U.S. Army (Ret), was selected as the first recipient of the new recognition. Sergeant Lester currently serves as a Regulatory Specialist with the Florida Department of Agriculture and Consumer Services, and served 32 years in the U.S. Army, Florida National Guard, and Missouri National Guard.

“I’m grateful for the service and sacrifice of every one of Florida’s 1.5 million veterans, and wanted to recognize those who have gone even further in giving back to our communities,” said Commissioner Nikki Fried. “I’m excited that our first Veteran of the Month is in-house to our Department, and especially proud to recognize Sergeant Lester during Women’s History Month. We’re so honored that she’s a part of our Department family.” 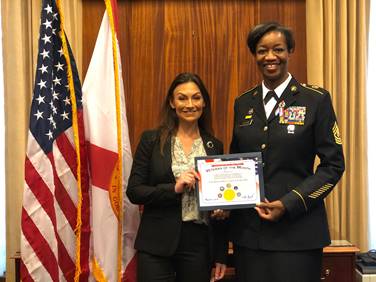 A native of Tallahassee, Sergeant Lester first joined the Florida Army National Guard in 1984, served in the 53rd Signal Brigade, and the 107th and 70th Mobile Public Affairs Detachments, as well as the Missouri National Guard.

She earned her Bachelor’s degree from the University of Florida, and graduated from the Defense Information School at Fort Meade.