Today marks 100 days since Attorney General Ashley Moody swore an oath to serve as the 38th  Attorney General of the State of Florida. During this short period of time, Attorney General Moody is already delivering on campaign promises. The Attorney General’s Office is taking swift action to combat the national opioid crisis, consumer fraud, human trafficking and to support Florida’s law enforcement community.

Attorney General Ashley Moody said, “We are fighting every day for a safer, stronger Florida, and I am proud of my team for the hard work and dedicated way they approach this important mission. We are combating the opioid crisis, fighting fraud, protecting seniors, recognizing our brave law enforcement officers and much, much more. There are still a lot of challenges before us, and I vow to continue to approach this job every day with a sense of urgency and passion for protecting the vulnerable, prosecuting criminals and defending the rule of law.” 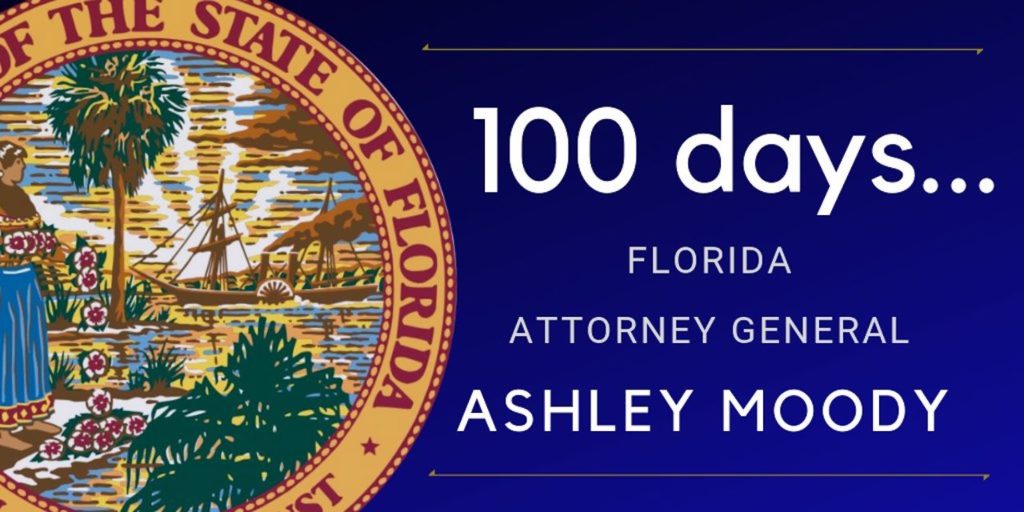 In the fight to stop fraud and protect consumers, including seniors, from abuse, fraud and exploitation, Attorney General Moody:

These are just a few examples of the achievements during the first 100 days of Attorney General Moody’s Administration. Attorney General Moody also helped obtain a multistate, multimillion-dollar settlement with Fiat, secured 45-year prison sentences for two of the infamous ninja robbers, recovered millions through a national health care fraud scheme, assisted the DEA in a drug trafficking ring bust and more.