Governor DeSantis has been clear in his support of law enforcement agencies throughout the state to combat the opioid addiction epidemic that is a menace to our communities. Governor DeSantis has also re-established the Office of Drug Control within the Executive Office of the Governor and announced the creation of a Statewide Task Force on Opioid Abuse.

“The Office of Drug Control was discontinued several years ago, but the importance of restoring its functions could not be more obvious,” said Governor DeSantis. “We cannot allow these drugs and the criminals who pedal them to poison our communities and destroy lives. We must have strict enforcement for these dealers and treatment for those who have become addicted.”

“There are 17 opioid-related deaths per day in Florida, but the good news is that we believe in hope and know that Floridians are stronger and more resilient than these drugs will ever be,” said First Lady Casey DeSantis. “We have got to fight for our kids who are the most vulnerable in this crisis. Nearly half of all children removed from a home has something to do with substance misuse. One of my top goals as Chair of the Children and Youth Cabinet is to support our law enforcement and tackle this crisis head on for our future generations.” 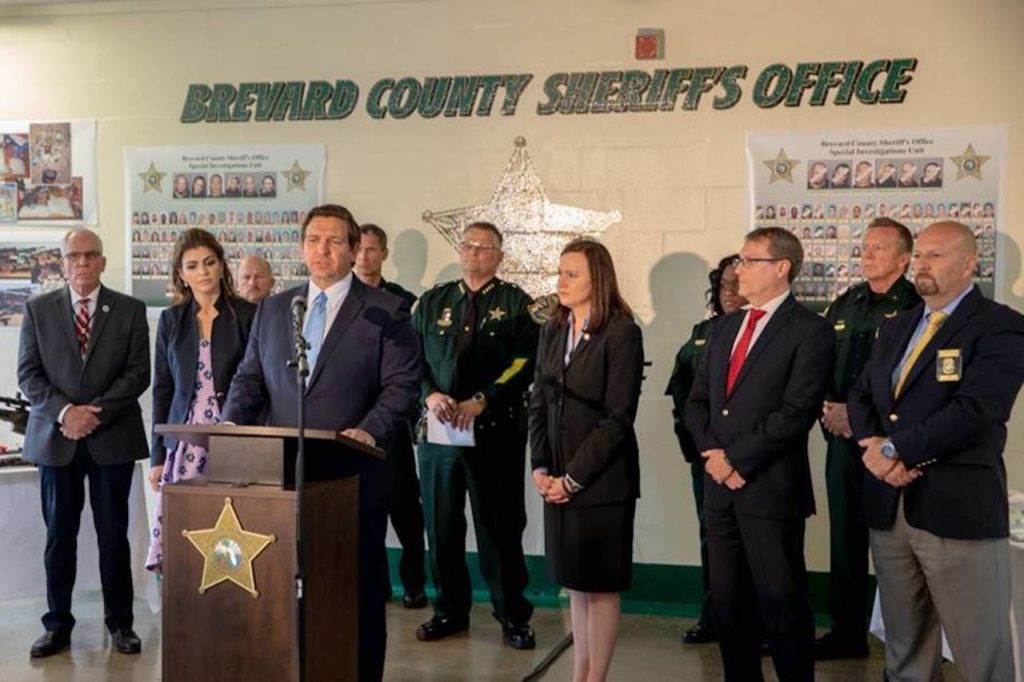 “Heroin and fentanyl are killing Floridians, and we must do everything we can to keep these drugs off our streets,” said Attorney General Ashley Moody. “I’m proud to stand with Governor Ron DeSantis and Brevard County Sheriff Wayne Ivey to announce the takedown of this massive drug trafficking ring. Seizing these drugs will save lives, and operations like these are an important component of our fight to end the opioid crisis.”

“I would like to thank our Governor and First Lady for their amazing support as our team has dismantled one of the largest and most significant drug investigations ever conducted in Brevard County,” said Sheriff Wayne Ivey. “This epidemic is not just impacting our community, it’s impacting every community in our state and country. Today we removed over 100 predators from our community who chose to create and then prey upon the addictions of others for their own greed.”

The Florida Legislature has appropriated over $100 million to address the opioid epidemic plaguing the state. Florida was also awarded $26 million in federal funding for Florida’s State Opioid Response Project, which is designed to address the opioid crisis by reducing opioid deaths, preventing opioid abuse among our young people, and increasing recovery services and access to treatment.

In recent years, drug overdoses from opioids, methadone and other drugs have become the nation’s leading cause of accidental deaths. In 2017, more than 70,000 Americans died from drug overdoses, with 30,000 being from fentanyl. Of that number, 3,245 of those deaths occurred in Florida.