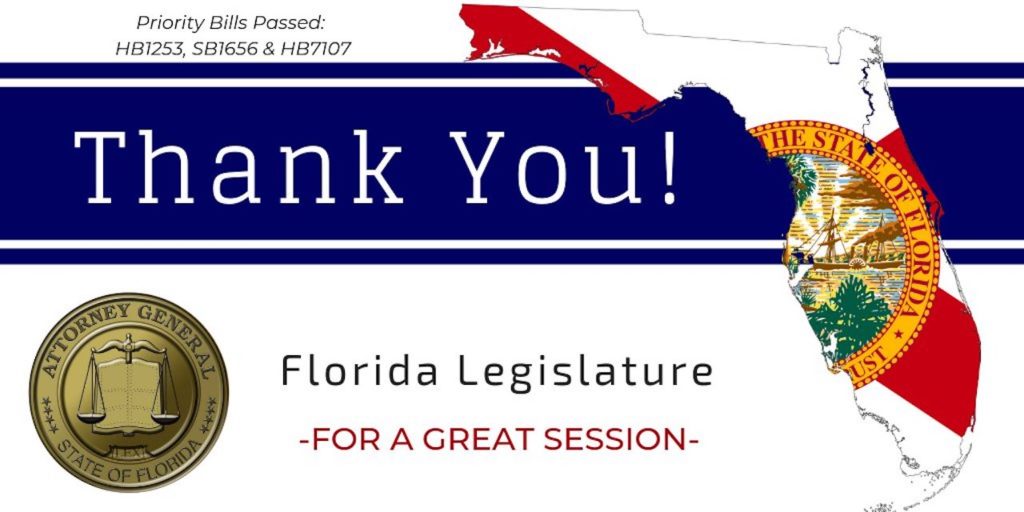 Attorney General Ashley Moody said, “I want to thank each member of the Florida Legislature for working tirelessly on behalf of Floridians and joining our office to pass bills that will help us better protect the citizens of this great state. It has been a productive 60 days full of spirited debate and intense discussion, and thanks to this process, our office will have the tools necessary to better serve and protect Floridians.

“I especially want to thank House Speaker Jose Oliva, Senate President Bill Galvano, and all of the senators and representatives that partnered with our office to sponsor legislation that will help the Florida Attorney General’s Office further its mission of protecting Floridians and upholding the rule of law.”

Attorney General Moody’s office worked with lawmakers in the House and Senate on multiple issues throughout the session. Below are several of the priority bills passed by the legislature:

HB 7107 by the House Judiciary Committee will codify the Attorney General’s emergency rule to allow children and adults suffering from rare forms of epilepsy to access life-changing, FDA-approved medication. The Senate companion bill was SB 7082.