The letter, also sent to U.S. Secretary of Commerce Wilbur Ross and U.S. Secretary of the Treasury Steven Mnuchin, cited the need to not worsen difficulties faced by Florida timber farmers. Florida exports to China of key timber commodities have declined 66 percent this year. Timber is Florida’s largest commodity, and is the largest agricultural sector and economic driver in the Florida Panhandle; timber suffered $1.3 billion of the $1.7 billion in damage the Panhandle region faced from Hurricane Michael last October.

The letter reads in part:

“China’s 25% tariff is drastically reducing log exports. This is devastating Florida timber businesses, as many growers rely heavily on exports. As Chinese timber needs are filled from other nations such as Russia, New Zealand, and Brazil, American producers are facing great difficulty in maintaining their investments, market share, and livelihoods. … Our country needs fair trade agreements. We should expect all nations to play by the rules. But protecting America’s and Florida’s farmers should not mean exposing them to the irreparable harm of retaliatory tariffs. We cannot sacrifice our agriculture jobs and our economic security while tilting at windmills in pursuit of fairer trade.”

The letter may be downloaded here, or viewed below on Twitter: 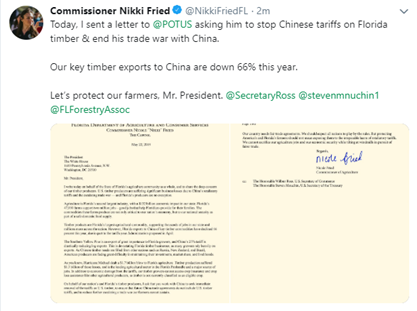 Earlier this week, Commissioner Fried criticized Vice President Pence’s defense of the USMCA trade agreement as “smoke and mirrors from the White House” and “a bad deal for Florida’s farmers.” She has also been critical of President Trump’s China tariffs threatening a potential new deal exporting Florida blueberries to China, and last week spoke before Congress on the need to protect Florida farmers from unfair trade practices.