Governor Ron DeSantis today visited Hub Etzion Industrial Park within the Gush Etzion region of Israel for a roundtable meeting with Israeli officials to discuss the boycott, divestment and sanction (BDS) movement and why Israel has been unfairly targeted for discrimination.

The visit to Hub Etzion was also of historical significance as it marks the first time a Florida Governor has crossed the “green line” into Judea and Samaria, also known as the West Bank, which is Israel’s biblical heartland.

“I’ve made it clear since taking office that I will be the most pro-Israel Governor in the nation and that BDS is DOA in Florida,” said Governor DeSantis. “Today’s roundtable with Israeli officials in Gush Etzion provided valuable insight into the BDS movement, its targeting of Jewish businesses and organizations and the harm that this movement also causes Palestinians. When I became governor, we took immediate action to stand against commercial discrimination of Israel by placing Airbnb on Florida’s scrutinized companies list and we have since been successful in convincing Airbnb to reverse its discriminatory policy. Florida is a very pro-Israel state and the people in Israel should know that we really value our relationship.”

“It is a pleasure to welcome Governor Ron DeSantis, not only to Israel, but to Judea and Gush Etzion. Here lie the roots of the great alliance between the United States and Israel, which is built first and foremost on our shared values,” said Israel Minister of Public Security Gilad Erdan. “Governor DeSantis has been one of the greatest and most consistent friends of Israel and of the U.S.-Israel alliance. Governor DeSantis promised that under his leadership, Florida would be the most pro-Israel state in America and he has kept his promise. In the name of the government and people of Israel, I want thank Governor DeSantis for all that he has done.”

Hub Etzion is a flexible work and central meeting place for the growing hi-tech, small business and self-employed community of Gush Etzion and Efrat in Judea and Samaria. The Hub has affordable workstations and office space in a professional and productive business environment. The Hub also creates opportunities for organic networking and collaboration, and hosts events and conferences to foster the growth of Startup Nation in the area. 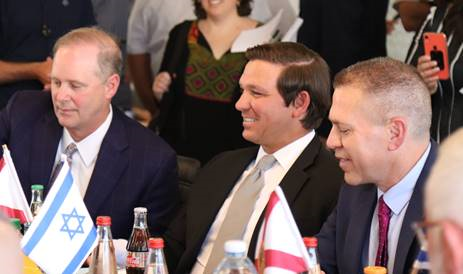