Governor Ron DeSantis and members of the Florida Cabinet today held a historic ceremonial meeting at the United States Embassy in Jerusalem.

The meeting served as a chance for the Governor and Cabinet members to exchange best practices and hear from Israeli leaders on issues of mutual interest to Florida and Israel.

“I was honored to take part in this historic meeting today at the United States Embassy in Jerusalem,” said Governor DeSantis. “Today was a significant milestone in the long relationship between Florida and Israel, our strongest ally in the Middle East. I want to thank Attorney General Moody, CFO Patronis and Commissioner Fried for joining me and assuring the people of Israel that Florida stands strong with them.”

“Israel is a vital economic and military ally to our state and country,” said Attorney General Ashley Moody. “I want to thank Governor Ron DeSantis for his leadership in facilitating this business development mission and the state’s ceremonial cabinet meeting.”

“Joining Governor Ron DeSantis in Israel for our Cabinet Meeting marked a monumental moment in Florida’s history,” said Chief Financial Officer Jimmy Patronis. “Our state not only values our relationship with our strong ally in the Middle East, but we also recognize their value as a vital economic partner. Israel is a true friend of Florida.”

“Israel is one of the world’s leading nations on technology, agriculture and research, and the Middle East’s only democracy,” said Agriculture Commissioner Nikki Fried. “As a woman of Jewish faith, I am proud to join my fellow Cabinet members in Israel to represent the people of Florida, to develop opportunities and innovations for our state and to strengthen the special bond between our countries.” 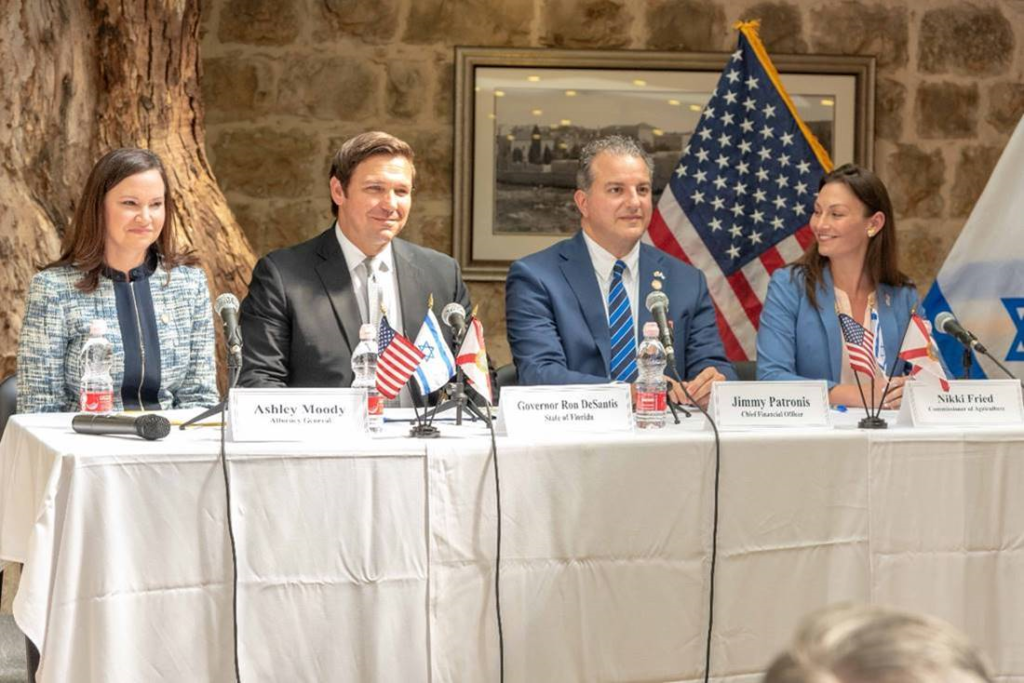 At the meeting, the Governor and Cabinet members adopted a resolution recognizing the meaningful relationship between Florida and the State of Israel. A copy of the resolution can be found HERE.

They also heard three presentations on topics ranging from terrorism, to water quality to emergency management.

During the presentation on terrorism, the Governor and Cabinet members heard from Miriam Fuld, the wife of Ari Fuld, an Israeli American man who was killed in a terrorist attack beyond the Green Line in September of 2018. Ari was a 45-year-old father of four who was stabbed by a Palestinian teenager outside of a shopping mall. Following the attack, Ari pursued and shot at his assailant, saving the lives of others. Miriam Fuld discussed the need to stand strong against terrorism around the world, particularly in the Middle East and Israel.

The presentation on water quality was given by Yossi Yaacoby, Chief of Staff to Eli Cohen, the CEO of Mekorot, Israel’s national water company. As Israel’s leading water carrier, Mekorot handles 70% of Israeli water and has been one of the most significant catalysts for largescale growth and development. The company specializes in design, planning and project management of water related infrastructure in Israel. Mr. Yaacoby and the Florida Cabinet discussed innovative solutions to combat mutual water quality issues facing Florida and Israel.

The emergency management presentation was delivered by Jacob Wimisberg, Director of Strategy and Cooperation for the Israel National Emergency Management Authority, part of the Israel Ministry of Defense. Mr. Wimisberg discussed how Israelis deal with emergency situations frequently, and outlined steps the Israeli government takes to deal with these emergencies in the safest, most rigorous ways possible. He touched on how social media and artificial intelligence are helping to manage events and deliver critical information to the public during times of crisis.

The meeting was streamed live on The Florida Channel to ensure that Floridians were given the opportunity to view it. Video of the meeting can be found HERE.