You are here: Home / Government / Secretary Lee Announces the Designation of Cycadia Cemetery on the National Register of Historic Places

“Cycadia Cemetery is a culturally and historically significant site for Tarpon Springs’ Greek community,” said Secretary Lee. “Artistic detail on many of the graves is associated with important cultural practices such as sponge diving and music as well as religious beliefs.”

Cycadia Cemetery is nationally significant for its association with Tarpon Springs’ Greek community, the sponge industry and Greek music, and as a site at which community members maintained Greek burial practices and religious rituals. It is also significant for the distinctive art elements incorporated into its Greek American funerary monuments. The cemetery received the National Register designation of Traditional Cultural Property, reflecting how the grave markers and funeral rituals that take place at Cycadia Cemetery continue to reflect Greek and Greek American traditional culture. 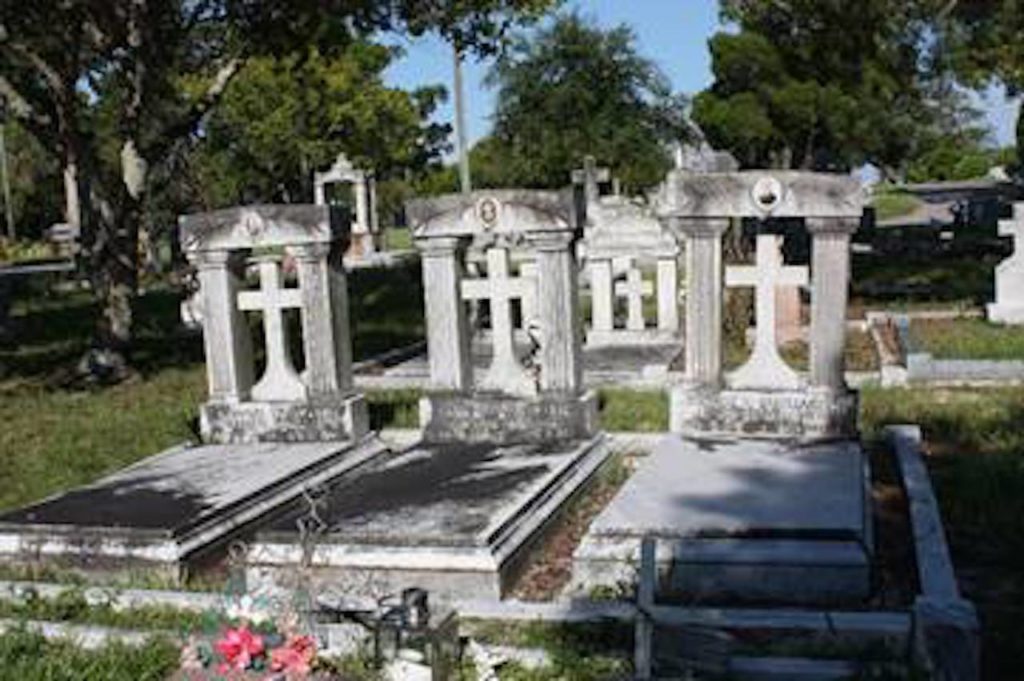 Tarpon Springs has been home to a large Greek American community since the early 20th century, and today has the highest percentage of Greek Americans of any city in the United States. Sponge diving crews came from the Dodecanese islands of Kalymnos, Halki and Symi and the Saronic Gulf islands of Aegina and Hydra after learning about Tarpon Springs through letters, newspaper articles and advertisements offering to pay travel expenses. Sponge diving had already been a thriving industry in Tarpon Springs, and the city capitalized on the experience and expertise of the Greek sponge divers to further increase the success of the community. The constant stream of Greek immigrants changed Tarpon Springs forever. Beginning in the 1880s, the dominant social group was wealthy Northern transplants or visitors who built grand residences near Spring Bayou and the major avenues. The Greeks, however, soon established Greektown with numerous residences, stores, churches, restaurants, coffee houses and recreational facilities that stretched from the Sponge Docks to the central section of the city. Greektown was designated as a Traditional Cultural Property historic district on the National Register of Historic Places in 2014, and Cycadia Cemetery, while not within the boundaries of the district, is associated with its culture and practices.

Cycadia Cemetery is significant for the number of sponge divers and boat captains interred there. Sadly, the dangerous profession of sponge diving resulted in many deaths. The gravestones, mausoleums and large family plots in Cycadia Cemetery are among the most distinctive in the nation—and they differ from graves both in Greece and among non-Greek Tarponites. Many headstones are carved with sponge boats, anchors and diving helmets, or include porcelain portraits of the deceased in their diving suits or at the Sponge Exchange.

To entertain the large Greek community—which has become even larger in the winter season with the arrival of Greek snowbirds, many nationally respected Greek and Greek American musicians and vocalists have lived in Tarpon Springs and performed at kafeneia (coffee shops), restaurants, clubs or for special events. Some of these significant musicians are buried in Cycadia Cemetery, including George Katsaros (1888-1997), a guitarist and one of the most widely respected Greek musicians of the 20th century, and Amalia Baka Vasilia (1897-1979), a singer who was one of the most famous Greek female vocalists of her time. Another significant burial at Cycadia Cemetery is Mother Superior Thekla Makris (1910-1992), believed to be the first Greek Orthodox nun in North and South America.

About the Florida Department of State’s Bureau of Historic Preservation
The Bureau of Historic Preservation (BHP) conducts historic preservation programs aimed at identifying, evaluating, preserving and interpreting the historic and cultural resources of the state. The Bureau manages the Florida Main Street Program, and under federal and state laws, oversees the National Register of Historic Places program for Florida, maintains an inventory of the state’s historical resources in the Florida Master Site File, assists applicants in federal tax benefit and local government ad valorem tax relief programs for historic buildings, and reviews the impact that development projects may have on significant historic resources. For more information, visit flheritage.com/preservation.

The Florida Department of Juvenile Justice (DJJ) held a youth assembly to echo the message of The Facts. Your … END_OF_DOCUMENT_TOKEN_TO_BE_REPLACED