Prior to serving in the Florida House, Jones was an educator in Broward County public schools. As a state lawmaker, Rep. Jones has been a proud co-sponsor of the Florida Competitive Workforce Act, and an unflinching advocate for civil rights, LGBTQ rights, and the rights of all marginalized people. Senate District 35 covers parts of Miami-Dade and Broward County including Miramar, Opa-Locka, and West Park. Currently represented by State Senator Oscar Bryanon who is unable to seek re-election due to term limits, this heavily democratic seat will see one of the most competitive state legislative primaries in the 2020 election.

“Rep. Shevrin Jones’ campaign for Senate District 35 is unequivocally the top state legislative priority of Equality Florida Action PAC in the 2020 election,” said Joe Saunders, Senior Political Director for Equality Florida. “We know that when our community has a seat at the table, the lives of all LGBTQ Floridians improve. We’re going to use every tool, engage every donor, and rally every troop we have to help Shevrin Jones make history. It’s time for an authentic and passionate champion for our families in the Florida Senate. This is the year we’re going to make history and change the Florida Senate forever.”

“I am so proud to receive the endorsement of Equality Florida Action PAC,” said Shevrin Jones, candidate for Florida Senate, District 35. “I have spent my career fighting against discrimination and standing up for Floridians who have been pushed to the margins. As a member of the Florida House, I’ve worked every day to stand up for our state’s most vulnerable. As a Senator, I’ll fight even harder to make sure every family has a pathway to opportunity – regardless of who you are, what your zip code is, what language you speak or who you love.”
​​​​​​​
Equality Florida Action PAC is the largest organization and most influential organization in Florida devoted to electing pro-equality candidates. Most recently, Equality Florida Action PAC played a defining role in the breakthrough elections of Fort Lauderdale Mayor Dean Trantalis, Tampa Mayor Jane Castor, State Representative Carlos Guillermo Smith, and State Representative Jennifer Webb – all of whom won historic races as openly LGBTQ candidates. 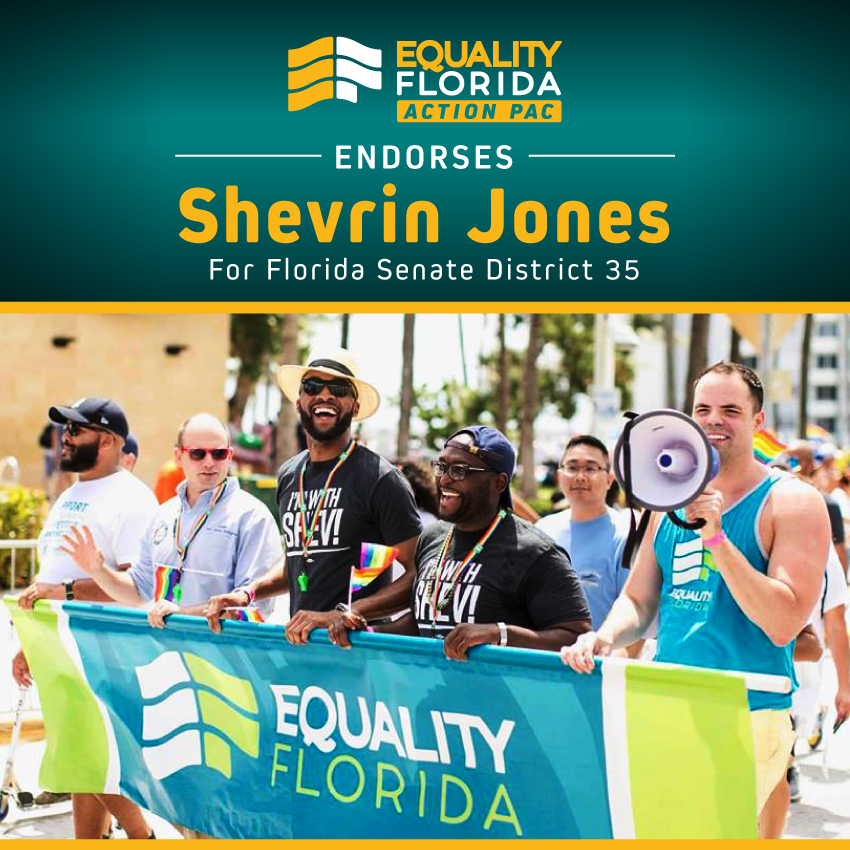 With All Relief Expected to be Obligated, OUR Florida Will No Longer Accept Applications on May 12th  OUR … END_OF_DOCUMENT_TOKEN_TO_BE_REPLACED