Using four vignettes to illustrate his message, the Senior African Methodist Episcopal (AME) Bishop assured graduates and those gathered at the Al Lawson Jr. Multipurpose Center and Teaching Gymnasium that despite obstacles and challenges, their alma mater is a great launching pad for success.

Richardson recalled a trip when he was lost while driving to a speaking engagement in Beaufort, South Carolina, and asked for help. He was told he couldn’t get to his destination from where he was. FAMU graduates have far better options, he assured his audience.

“I have good news for you; your destination can be reached from the halls of FAMU; your destiny can be fulfilled with a FAMU degree,” said Richardson, who received an honorary doctorate for his years of service during the commencement ceremony, which was presided over by President Larry Robinson, Ph.D. Degrees were awarded to 300 graduates from all of the University’s colleges and schools.

The Tampa Bay native graduated from FAMU with a bachelor’s in theology and philosophy in 1969. He earned his Master of Divinity and Doctor of Sacred Theology degrees at the Interdenominational Theological Center in Atlanta. 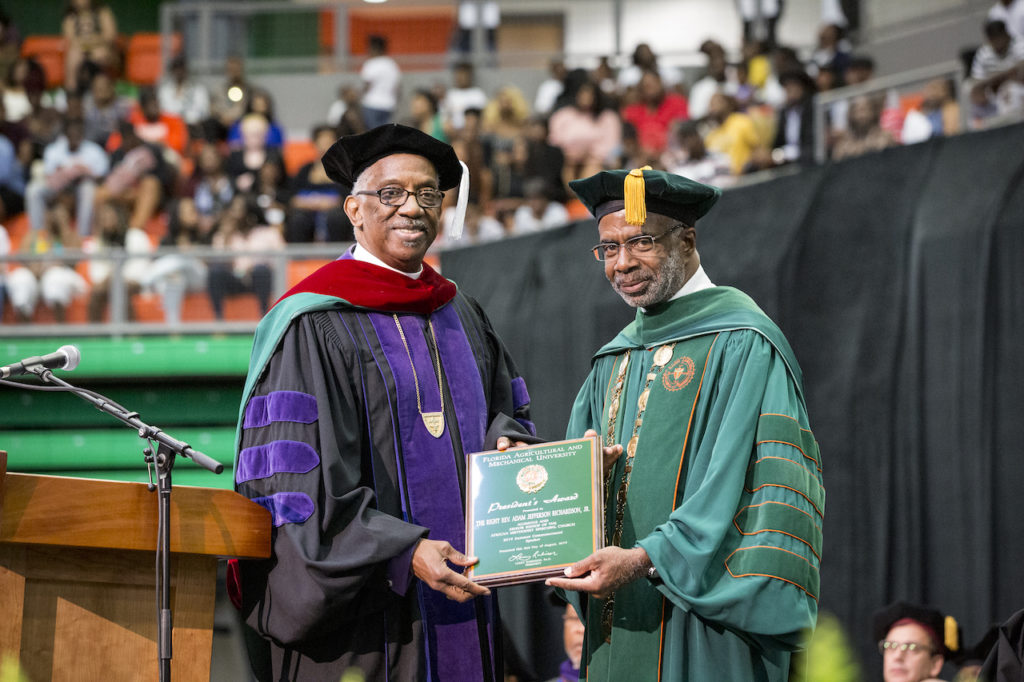 In 1996, Richardson was consecrated as the 115th bishop of the AME Church in 1996. Before that, he served as pastor for Bethel AME Church in Tallahassee and other congregations.

In July, he was consecrated as the senior AME Bishop and is expected to serve in that role until his retirement in 2024. The senior bishop is the active bishop with the longest tenure of service in the AME Church and is first in order of precedence among the Council of Bishops.

During his journey from Marching “100” band drum major to Senior AME Bishop, Richardson has seen the world change as young people challenged the “mountains” of injustice, inequality, discrimination and despair.

“Passionate speaking, thinking, writing concerning contemporary “mountains” like racism and violence and a hundred other “isms” related to social justice can cause movement, if not a movement,” Richardson said. “Together, we have the capacity to make such mountains move, if only just a little at a time. In the 50 years since leaving FAMU, I’ve seen mountains move.”

The account of an African-American student who survived the 2018 Parkland high school shooting was a story of hope in one of life’s darkest moments, Richardson said.

“It’s a four-letter word that’s also found in the definition of faith. It’s also been discovered to be indispensable to life,” Richardson said. “We can live for quite a while without food and drink, but not so long without hope.”

In closing, Richardson, who quoted Dr. Martin Luther King Jr. and President Barack Obama, gently chided those who would be stingy about giving back to their alma mater even as they sang the song about love and charity.

“As the old saying goes, you can give without loving, but you cannot love without giving,” he said. “And since FAMU is forever our academic mother, alma mater, we ought to love and give.”

Following Governor DeSantis' authorization, a total of 5,000 Florida Guardsmen are being activated to State … END_OF_DOCUMENT_TOKEN_TO_BE_REPLACED