You are here: Home / Education / Florida HBCU Presidents Tout their Relevance and Pledge To Work Together For Their Continued Survival and Success

Presidents of Florida’s four historically Black colleges and universities (HBCUs) reaffirmed the relevance of their institutions and pledged their commitment to continue to educate and graduate students of color.

Meeting on the Tallahassee campus of the host Florida A&M University (FAMU) for the inaugural Florida HBCU Impact Summit, the presidents of Bethune-Cookman University (BCU) of Daytona Beach, Edward Waters College (EWC) of Jacksonville, and Florida Memorial University (FMU) of Miami Gardens and FAMU spoke of the challenges they faced and the opportunities that lay ahead.

The purpose of the half-day event was to bring together the four university presidents and their administrators in a historic gathering to focus on the importance of HBCUs to the state financially, culturally and academically. Next year, the event will be hosted by FMU.

“This is an opportunity to celebrate our HBCUs,” said moderator Belvin Perry, who serves on both the BCU and FAMU boards of trustees.

FAMU President Larry Robinson, Ph.D., said the lack of diversity in the area of STEM has hurt America’s competitiveness globally. The search for talent needs to be redirected, he said.

“There’s a tremendous amount of talent inside the classrooms of these four institutions and others like them across the country,” Robinson told the gathering. America’s global competitiveness will improve when it begins to fully mine the talent at FAMU and other HBCUs. 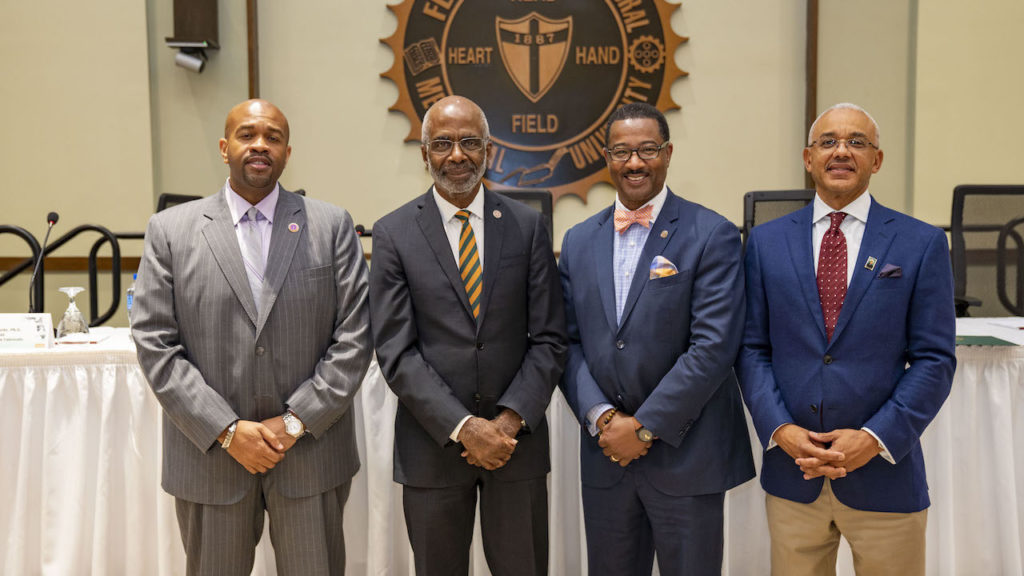 “The next moon shot is the realization that we need to take advantage of the talent that is resident in these universities we call HBCUs,” Robinson said. “It’s the next big thing and we really need to embrace that.”

In recalling his school’s long struggle for survival, FMU President Jaffus Hardrick, Ph.D., spoke of his university’s move from Live Oak, Florida, to Jacksonville to St. Augustine and then to South Florida 50 years ago due to the threats of racial violence. He boasted of the rebirth of FMU football and bringing back the school’s marching band.

“We are bringing that level of creativity back to make sure we are making a big difference,” Hardrick said. “We will no longer be a secret. Everyone is going to know what we are doing. We are significant. We are relevant, and we are here to stay.”

The summit featured reports from administrators of all four schools giving a snapshot of their past accomplishments, present challenges and future opportunities. Each president responded to questions about their long-term survival.

FAMU is a public university; the other three institutions are private. Asked about the challenges they face, the presidents said it was to sustain their survival and to address maintenance needs and improve individual and corporate giving.

“We have to be more businesslike,” said EWC President A. Zachary Faison Jr., Ph.D., who was critical of companies who profited from the school, but rarely gave back to the institution.

“Some of the corporations who profit from us need to invest in us,” Faison said. “It’s a new day. If you do business with EWC, we expect you to invest in us.”

Others spoke of the challenge in attracting and retaining students raised in a digital age. “We have to do things differently,” Hardrick said. “We still can’t be operating as if it’s 1950. It just won’t work.”

No matter the improvement and the changes for modernization, however, Robinson said it was vital that HBCUs not lose sight of who they are and what they do.

“We are to be staying true to the things that make HBCUs,” said Robinson, as he spoke of how HBCU faculty and administrators treat students. “We have every reason to expect them to be successful. They don’t have to waste their time trying to prove they belong. We put our arms around them and go the extra mile.”