The Agency for Health Care Administration (Agency) issued final orders to five providers for failure to meet licensure requirements during the month of June. There was one final order to revoke an existing license, three final orders to deny license renewals, and one final order for a license surrender. Some of these providers were enrolled in the Medicaid program, and the Agency has terminated, or is in the process of terminating, their participation in the program.

Agency Medicaid terminations and suspensions typically result from failure to return funds due to the Agency within required timeframes; a charge, indictment, or guilty plea to a health care related crime; suspension, termination, or exclusion from Medicare or Medicaid in another state; or a license denial, revocation, suspension or termination by the licensing agency.

The chart below displays the Agency’s June licensure actions: 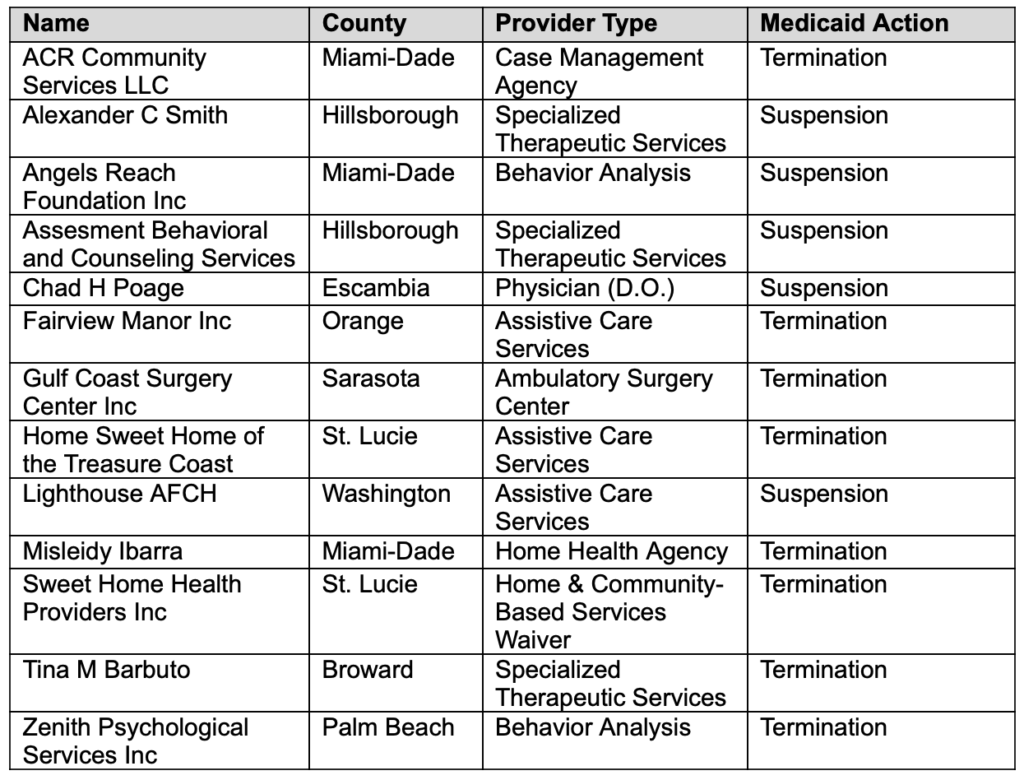 The Agency encourages anyone who may have a concern or observes a problem in any health care facility or with any provider regulated by the Agency, to file a complaint by calling our consumer complaint line at 1-888-419-3456 or by reporting online at ahca.myflorida.com/Contact/call_center.shtml.

Tips about suspected fraud can be reported by calling the Attorney General’s Fraud Hotline at 1-866-966-7226 or the Agency’s Consumer Call Center at 1-888-419-3456. Anyone can report fraud online by visiting the Agency’s website at apps.ahca.myflorida.com/mpi-complaintform.

The Agency for Health Care Administration is committed to better health care for all Floridians. The Agency administers Florida’s Medicaid program, licenses and regulates more than 44,000 health care facilities and 53 health plans, and publishes health care data and statistics at FloridaHealthFinder.gov. Additional information about Agency initiatives is available via Facebook, Twitter and YouTube.

From May to December, Florida has gained 748,100 private sector jobs The Florida Department of Economic … END_OF_DOCUMENT_TOKEN_TO_BE_REPLACED