You are here: Home / Business / Young Professionals Moving to Florida is On the Rise

While Florida is often thought of as a mecca for retirees, a recent analysis of moving trends by one of the nation’s top moving companies documented that nearly a third of new residents moving to the Sunshine State are young professionals.

The Suddath Companies, a 100-year-old global mobility company based in Florida, analyzed recent moving data to see who Florida’s newest residents were and what was attracting them. The findings show the state’s robust job market is drawing in young talent from across the U.S., with more than 30% of new Florida residents stating that it was a fresh opportunity provided by job transfers or new employment that made them want to call Florida home.

“This analysis shows us just how appealing the state is to working-age adults,” said Suddath President and CEO Michael Brannigan. “While Florida will always have a strong appeal to retirees and those nearing retirement, the state’s economy depends on attracting the workforce we need, and our analysis shows those younger workers are arriving.”

Suddath’s analysis showed that while 40% of new movers cited retirement as the prime reason for their move, an increasing number of people are relocating to Florida with something other than retirement in mind. More than 35% of those who recently relocated to the state are households of at least three people, suggesting children still young enough to live at home. A similar percentage have a head of household younger than 54.

The states where most new residents are coming from are California 11%, New York 9%, and Texas 9%, with other significant numbers from Georgia and North Carolina. Besides employment and retirement, the most common reason cited by those moving into Florida was a lifestyle change.

Florida’s population has been steadily growing. It has more than tripled since 1970, adding more than 3 million additional residents each decade and making Florida the third largest state in the nation.

“It’s not hard to understand why people are flocking to the Sunshine State, given Florida’s abundance of beaches, natural wonders and recreational opportunities,” said Brannigan. “Besides those assets, these numbers show that jobs are also an increasingly strong draw.” 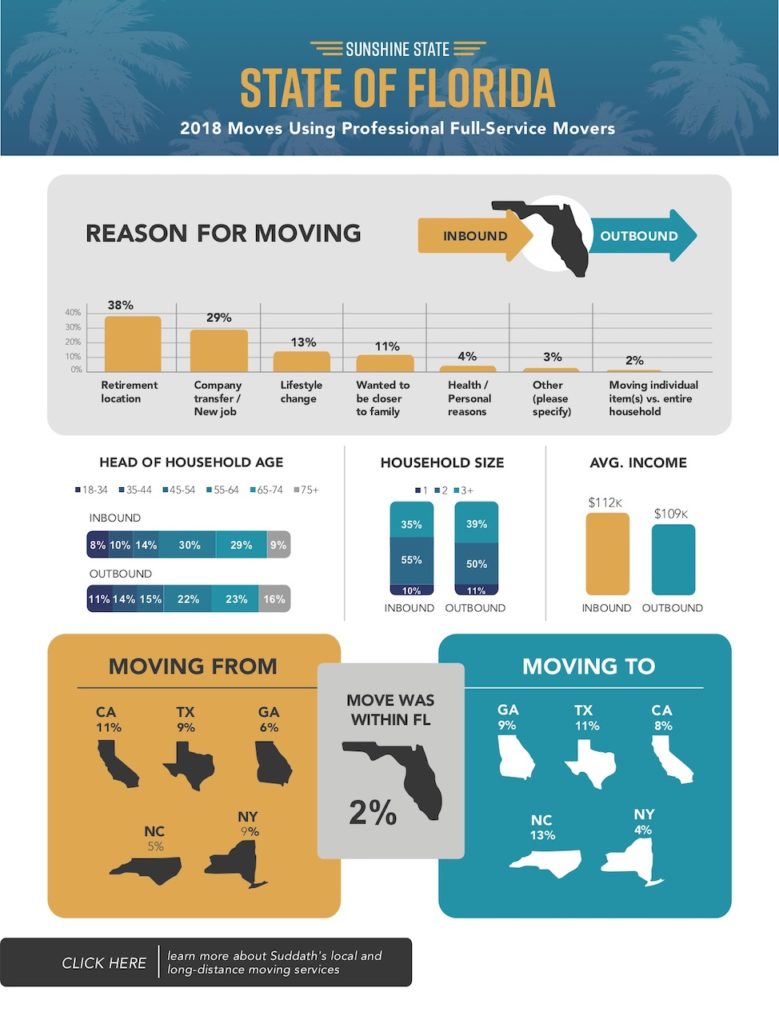