The Florida Guardian ad Litem Program honored State Representative Tyler I. Sirois of Merritt Island on Friday for his leadership in sponsoring a measure to help abused and neglected children in dependency court.

The Program made Representative Sirois an “Honorary Guardian ad Litem” for his role as the House sponsor of “Charting a Positive Path for the Future,” which streamlines communication related to children and youth who have multiple court cases, sometimes known as “crossover kids.” Gov. Ron DeSantis signed the bill into law on Apr. 26, 2019, and it became effective immediately.

“It is a moral imperative to care for the most vulnerable among us,” Representative Sirois told the crowd at the Duran Golf Club. “Our laws should be a reflection of who we aspire to be.” 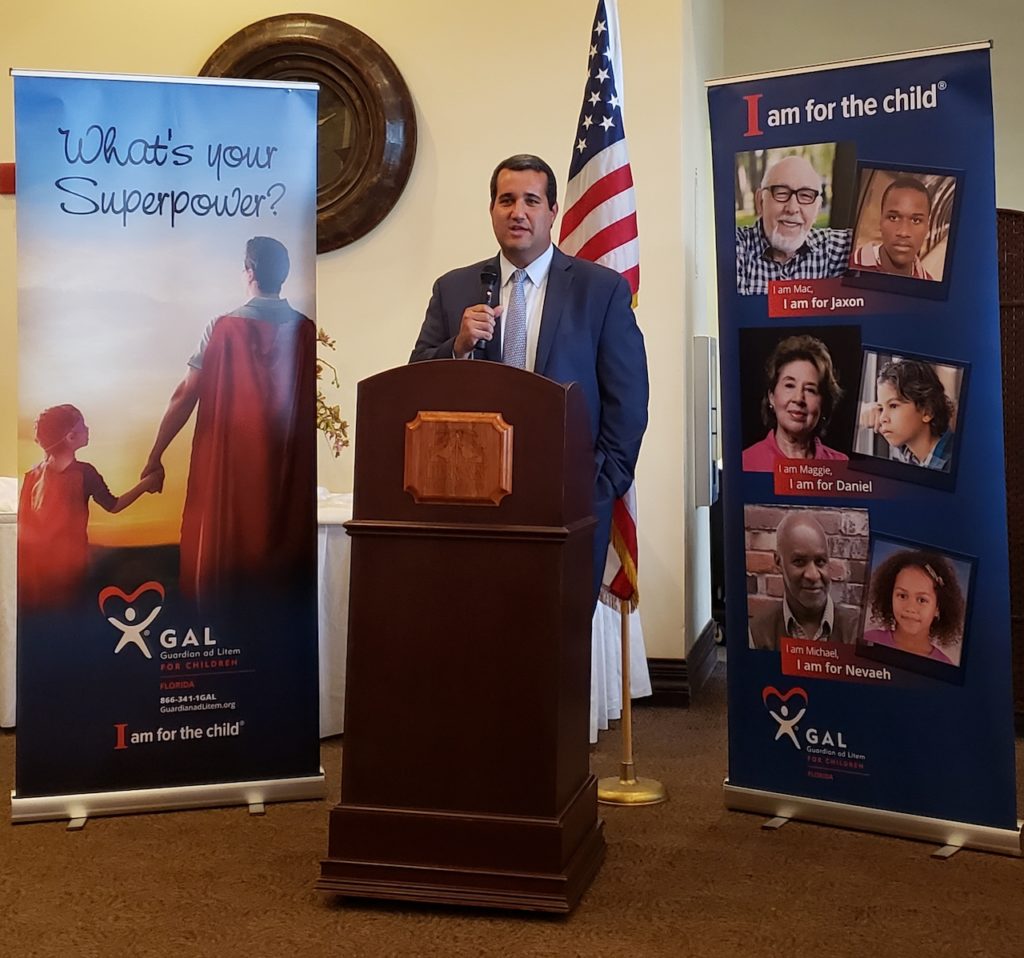 Guardian ad Litem Executive Director Alan Abramowitz said the lawmaker, who was elected to his first term in 2018, “has now given the GAL program the tools to ensure judges have all the information they need to make the best decision for a child. No first-year legislator has had a bigger impact on children’s issues than Representative Siriois.”

For children with both dependency and delinquency cases, the new law requires the Department of Juvenile Justice (DJJ) to notify the court and the parties in a dependency case of certain events, such as when the child is transferred from one DJJ facility to another. It also allows delinquency court judges to receive and consider information provided by the Guardian ad Litem Program and the child’s attorney ad litem if the child is under the jurisdiction of the dependency court. And it allows a guardianship petition for a child in dependency court to be filed either where the child resides or in the county with jurisdiction over the dependency case.

“This legislation is already having an impact,” Abramowitz said. “We are working with DJJ and the Department of Children and Families to ensure that judges have the best possible information in making decisions about these vulnerable children.”

Representative Sirois’ efforts for children didn’t surprise people in his home district, where he is executive director of the Office of the State Attorney for the Eighteenth Judicial Circuit. First elected to the Legislature in 2018, he also serves as president of the board of directors of the Children’s Advocacy Center of Brevard (CACB).

“Not only is he a great leader for Brevard County, he also has the heart of gold to go with it,” said Susan Moore, president of the Friends of the CACB Board. “He works tirelessly to make sure our children have a chance to grow and flourish into adults…Tyler has made a huge difference in our board with his vision and knowledge.”

“Representative Sirois works tremendously hard to ensure these vulnerable children have a safe place to go, a place where they can tell their story of abuse and/or neglect, a place where they are heard,” said Jeanie L. Raciti, director of the CACB Child Protection Team. “He has shown his compassion through his efforts in leading the Friends in successful fundraising efforts on behalf of the CACB, ensuring we have the funds to continue providing services to child victims of abuse, at no cost to the victim or their non offending caregiver.”

To learn more about the Guardian ad Litem Program or to become a volunteer, visit GuardianAdLitem.org or call 1-866-341-1425.

Following Governor DeSantis' authorization, a total of 5,000 Florida Guardsmen are being activated to State … END_OF_DOCUMENT_TOKEN_TO_BE_REPLACED