A state-of-the-art $11 million state facility, the Bronson Lab is Florida’s only animal disease diagnostic laboratory fully accredited by the American Association of Veterinary Laboratory Diagnosticians. The new 22,000 sq. ft. facility houses a full-service veterinary laboratory with the latest technology, dedicated to keeping Florida’s animals and citizens healthy. The lab will be managed by Dr. Reddy Bommineni of the Florida Department of Agriculture and Consumer Services, Division of Animal Industry, Bureau of Diagnostic Laboratory. 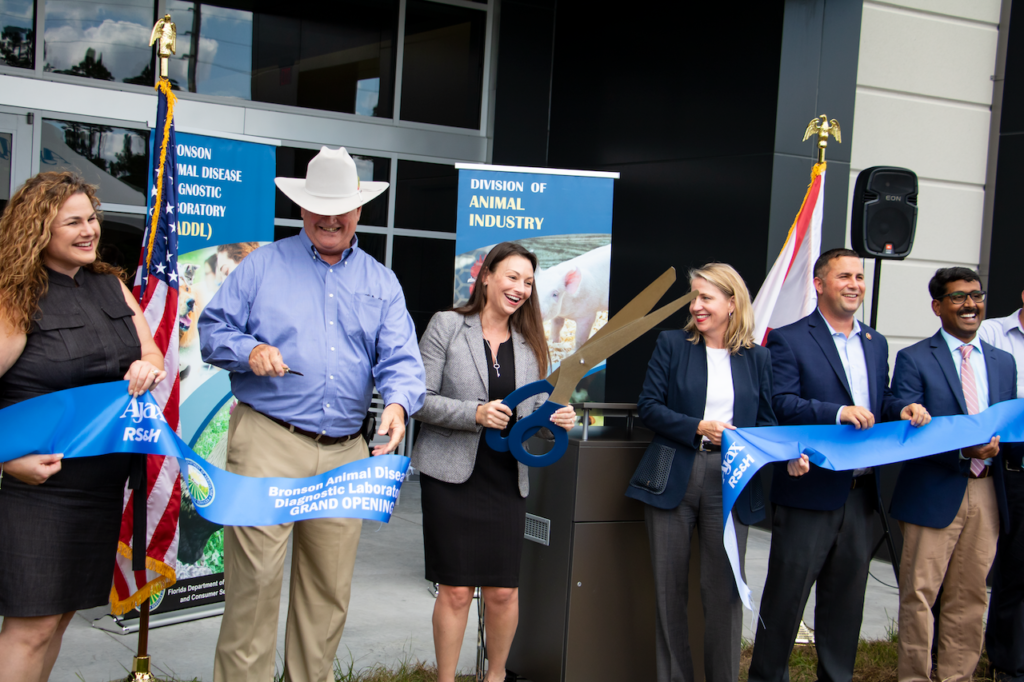 “From African swine fever to Zika virus, our experts have dedicated their careers to being at forefront of public safety. The new Bronson Animal Diseases Diagnostics Laboratory will play a pivotal role in monitoring health threats, protecting against diseases, and performing cutting-edge research and education,” said Commissioner Nikki Fried. “This new state facility wouldn’t be possible without our dedicated staff, industry partners, and former Agriculture Commissioner Charles Bronson. With a vision of supporting Florida’s animal industries, Commissioner Bronson’s commitment to the health of Florida’s animals and residents were pivotal to this lab’s success.”

During the ceremony, Commissioner Fried presented former Commissioner Bronson a framed picture of the lab, in appreciation for his service and for his family’s donation of the land in 1958 on which the Bronson Lab and its predecessor lab sits.

“I was in the fourth grade here in Kissimmee when this original facility was opened – and it’s been long due for an update, to continue the important work that’s done here to protect animal and public health and safety,” said former Agriculture Commissioner Charles Bronson, who served as Commissioner from 2001-2011. “This is more than an animal disease laboratory. It works closely with state and local public health officials, as 80 percent of diseases that animals get can be passed on to humans. On behalf of the Bronson family, we are proud to have our name on this facility.”

“Osceola County is the top cattle-producing county in the entire state, and we’re home to one of the biggest herds in the nation — this is a fitting site for the new Bronson Lab, which will help us take care of one of the most important industries to the Central Florida region,” shared Congressman Darren Soto, who represents Osceola, Orange, and Polk Counties in the U.S. House.