You are here: Home / People / Cleaning Up After Hurricane Michael

Like so many in Panama City, Shawontee Russell experienced the devastating effects of Hurricane Michael. Russell worked at the Community Health Rehabilitation Center, which was damaged so severely that it couldn’t reopen for a year after the storm. This meant that Russell, along with many of her coworkers, no longer had a job.

Unwilling to let this stand in her way, Russell immediately contacted her Employment Specialist, and, together they found the newly opened PruittHealth location in Panama City, which was hiring a housekeeper. Russell, who came highly recommended by her previous employer, was perfect for the job. 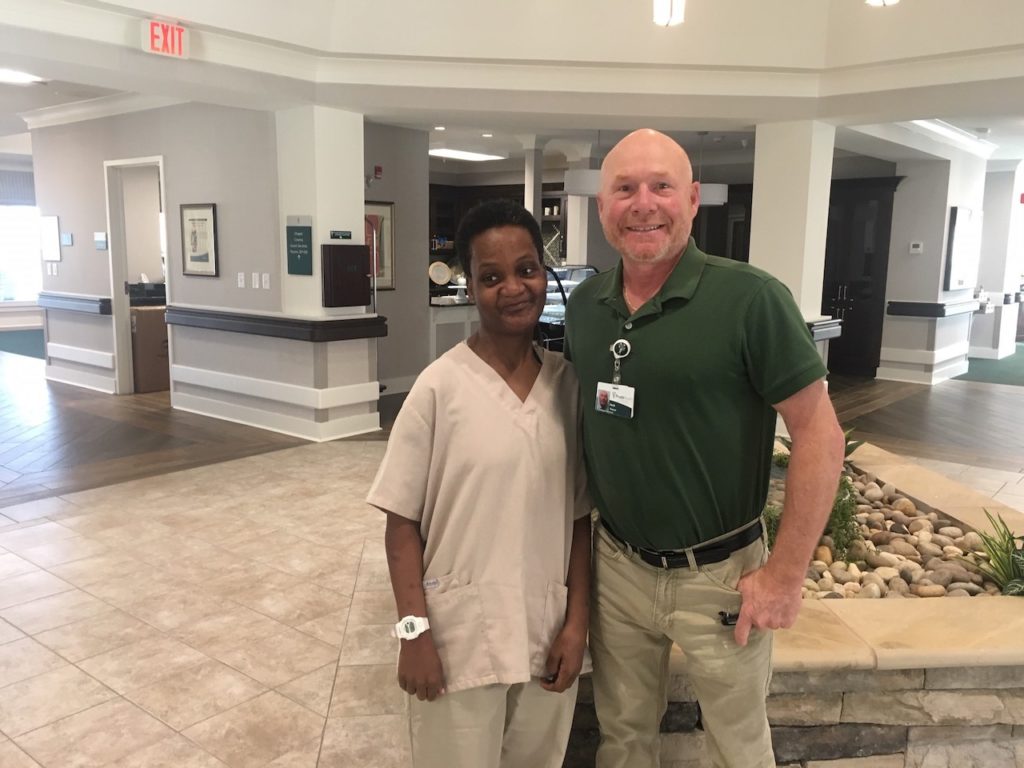 At the time, the company had a smaller staff, which meant that Russell had to run the laundry department by herself. And, as Russell’s supervisor, Hank Pierce, explains, she not only accepted this challenge, but she excelled in this role. Says Pierce, “I’m impressed with her. When she gets comfortable into a routine, she’s a tremendous asset to us.”

Russell has been at PruittHealth for less than a year, but she’s already been promoted from laundry to housekeeping, where her responsibilities include cleaning common areas, picking up trash, and helping with laundry. “I help patients,” Russell explains, “by keeping things clean and smelling good.” But her service doesn’t stop there. A key part of her job, she adds, is “making the patients smile. I like to bring one of the patients his newspaper. He and his wife love me.”

October is National Disability Employment Awareness Month, and APD is highlighting the workplace achievements of people with disabilities and the employers that hire them. Russell has a developmental disability and receives services through the Agency for Persons with Disabilities.

Russell receives glowing reviews from patients at the PruittHealth location in Panama City. But it is the independence that this job and its challenges have afforded her that Russell is most proud of. Says Russell, “I am proud that I am independent and do things on my own. I get myself to work. I arrange my transportation. I do my own training on the computer.”

When she’s not working, Russell is a devoted aunt to her nieces and nephews. And this job provides her the financial freedom to buy not only the basic life necessities, but also gifts for her family. Although in the short term, Russell is saving up for Christmas and birthday presents, her long-term goal is to one day save up enough to live in her own house.

For now, though, Hank Pierce is glad to have Russell on his team. And he’s excited for her continued growth with the company. Says Pierce, “I’m really happy with her, and I hope she keeps on growing. She’s been a wonderful employee. I’ve enjoyed her so much.”

APD supports people with developmental disabilities to live, learn, and work in their communities. The agency annually serves more than 55,000 Floridians with severe forms of autism, cerebral palsy, spina bifida, intellectual disabilities, Down syndrome, Phelan-McDermid syndrome, and Prader-Willi syndrome. For more information about the Agency for Persons with Disabilities, visit APDcares.org or call toll free 1-866-APD-CARES (1-866-273-2273).