“I was honored to stand with my cabinet colleagues to issue a pardon of the Groveland Four, but more action is needed – the families have called for exoneration and I join them in that,” shared Commissioner Nikki Fried. “A pardon forgives a crime, but an exoneration recognizes innocence. Our history books should reflect truth: the Groveland Four were accused of crimes they never committed.” 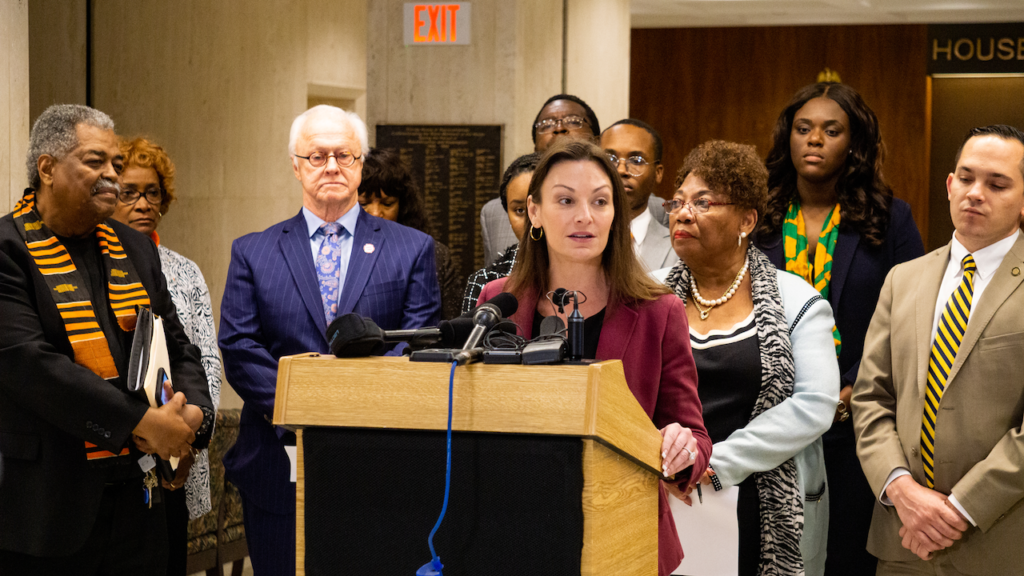 Commissioner Fried had pledged to seek their pardon during her first Clemency Board meeting. Following that pardon in January, family members of the Groveland Four and activists throughout Florida have continued to call for the exoneration of the falsely accused men. While the Groveland Four families recognize that a pardon excuses the actions of an individual who is guilty of a crime, an exoneration would recognize their innocence. While previously serving in the Florida Senate, Representative Thompson filed legislation to exonerate the four men, offer them a formal apology, and encourage the cabinet to pardon them.

“The Florida Legislature has apologized for the racial injustice that irreparably scuttled the lives of the Groveland Four, and the Governor and Florida Cabinet voted on January 11, 2019 to pardon the men – for which family members and many others are grateful,” stated Representative Geraldine F. Thompson. “We ask today for the next very important step, which would be exoneration, to acknowledge and appropriately note in history the innocence of the Groveland Four.”

During the press conference, the officials announced renewed efforts to achieve justice for the families. Representative Thompson announced she would be pushing for a joint House-Senate resolution, to exonerate Ernest Thomas, Samuel Shepherd, Charles Greenlee, and Walter Irvin and ensure that the State of Florida officially recognizes their innocence.

Commissioner Fried issued a proclamation calling for the State of Florida to publicly exonerate the Groveland Four. While the Florida Cabinet cannot grant an exoneration through the clemency process, they have the authority to issue a resolution, acknowledging innocence and exonerating the Groveland 4 publicly. These efforts are supported by the families as ways that would provide closure.

“Pardons were a major step forward, and the Greenlee family is very grateful to the Cabinet members for their actions earlier this year,” said Carol Greenlee, daughter of Groveland Four member Charles Greenlee. “Exoneration is the last step. My father didn’t commit this crime, and after more than 70 years, exoneration would mean everything to our family. He would be fully cleared and justice would be served.”

The Groveland Four families were thankful for the pardon, but continued their calls for an exoneration to correctly recognize Groveland Four’s innocence and clear their names.

“I have watched this Governor from afar, and I feel that in this case he understands the time has now come to right a wrong and that a pardon only was a band-aid over this infected wound. Exoneration is what was requested at the clemency hearing, and exoneration is the right thing to do,” said Beverly Robinson, cousin of Samuel Shepherd.

During the 2017 session, the legislature unanimously passed a resolution, sponsored by Senator Gary Farmer and Representative Bobby DuBose, which urged the cabinet to perform an expedited clemency review for the four men.

“Acting to the fullest extent of my power, I passed Joint Resolution 920 back in 2017 acknowledging the grave injustices perpetrated against Charles Greenlee, Walter Irvin, Samuel Shepherd, and Ernest Thomas, who came to be known as ‘the Groveland Four,’ ” stated Senator Gary Farmer. “A full pardon was secured for these four men, but that was not enough.”

In addition to the families and elected officials, advocates for justice from across the state and the nation joined in the call to formally recognize that the Groveland Four are innocent.

“Eleven months ago, the Florida Cabinet unanimously pardoned the Groveland Four, who were ‘wrongly written into Florida history for crimes they did not commit and punishments they did not deserve,’” said Chris Hand and Lori Kifer Johnson of the Groveland Four Clemency Coalition. “Floridians came together in a bipartisan way to support the cause of justice for Charles Greenlee, Samuel Shepherd, Walter Irvin, and Ernest Thomas. While the pardons represented important progress, we ask the State of Florida to take the next step and exonerate the innocent Groveland Four.”

“This generation of leadership has a moral imperative to right the wrongs of previous leaders,” stated Dick Batchelor, Chairman of the Board of Directors for the Central Florida Urban League. “The action to exonerate the Groveland Four is not only an obligatory signal to African Americans who have paid the cost of the past sins of blind racism — but a critically important overture to current and future generations that such injustice was not in vain and there is no going back to the ‘good ole days.’ ”

“In a letter to the Florida Cabinet, Gilbert King, author of the Pulitzer Prize-winning book about the Groveland 4, Devil in the Grove, advocated for exoneration, “The Groveland Four families deeply appreciate your work to correct the injustices that haunted them for decades. But there is one more step to be taken. While we can’t restore lives that were wrongly taken or years lost to unjust incarceration, we can give families back their good names.” Read the full letter here.