You are here: Home / Government / North Miami Beach Emerges as City of Opportunity in Miami-Dade County

State of the City Address Touts City’s Commitment
to Growth, Investment, and Quality of Life

The City of North Miami Beach and Mayor Anthony F. DeFillipo celebrated the City’s accomplishments and unveiled plans for its prosperous future during Wednesday evening’s State of the City Address at the Julius Littman Performing Arts Theater. Reflecting his passion for the community he serves, Mayor DeFillipo recapped the City’s successes and highlighted its opportunities for enhanced economic development, public safety, neighborhood investments, and quality of life for residents and visitors of this strong, thriving, multicultural city.

With nearly 4 million square feet of new and renovated projects in the planning and development process and a 19% increase in business tax receipts in just the last year thanks to new business openings, North Miami Beach has declared itself ‘open for business.’ “We are a city of passion, persistence, and purpose. We are a city that is now getting noticed for all the right reasons,” the mayor said. 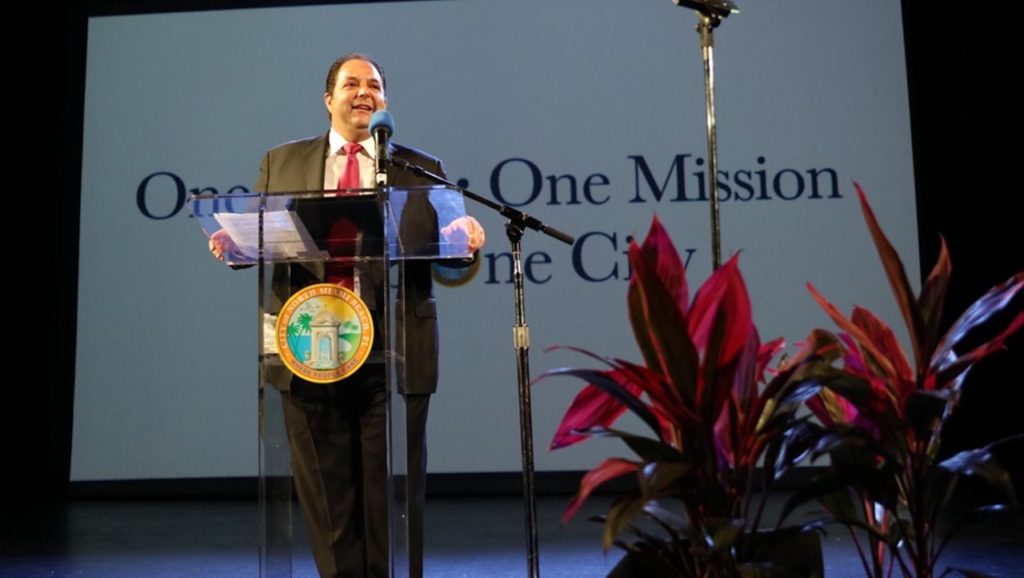 During his address, Mayor DeFillipo underscored the City’s enthusiasm for supporting businesses of all sizes that wish to grow in and with North Miami Beach.

“As a small-business owner myself, nothing makes me happier than witnessing that moment when long-held dreams become a reality,” Mayor DeFillipo said. “These small businesses create the distinct culture that illustrates the identity of our City’s brand.”

Additional achievements and projections touched on during the mayor’s address included:

In his State of the City Address, Mayor DeFillipo stressed the importance of having every North Miami Beach resident counted in Census 2020.

“An accurate count will properly document our population and will ensure that we receive our federal and state appropriations for health, education, elderly care, schools, and political representation,” he said.

A dynamic city of the future, North Miami Beach has cultivated an unprecedented amount of investment over the last five years and is ideally positioned for this positive trend to grow. As the City continues its forward momentum in 2020, the stage is now set for North Miami Beach’s emergence as the city of opportunity in Miami-Dade County.

For the video footage of Mayor DeFillipo’s full State of the City Address, please visit the City’s Facebook page: www.facebook.com/citynmb.