Can the extreme heat we are experiencing year after year actually cause Florida’s iconic panthers to melt? Yes, it can, and more quickly than you might think. The CLEO Institute, in concert with the VoLo Foundation, has partnered with Miami ad agency Zubi and award-winning artist/inventor/director Bob Partington to show us just how fast rising temperatures are affecting the state and its wildlife.

Partington, well-known for hosting The History Channel’s ThingamaBob show and for his unique inventions that combine art, science, technology, math, and engineering, was challenged by Zubi earlier this year to bring to life a creative concept the agency had to help CLEO put the state’s climate crisis in the spotlight.

The idea that Zubi and CLEO landed upon was a series of wax sculptures that would literally melt in the Florida heat over four to five days. Zubi then reached out to Partington, who was tasked with creating the melting sculptures. Working with colleagues at mixed media production company 1stAvenueMachine’s Los Angeles studios, Partington designed three sculptures that will each reveal a secret message related to their subject when they have melted. The next step was to decide what to depict. “Florida is such a visually enthralling state,” said Partington. “There are so many things that make it special. But the Zubi team asked us to hone-in on three icons that represent what Floridians and the world stand to lose – forever – if action is not taken now.”

The first sculpture, depicting a lifeguard hut of the kind to be found on beaches around the state, was unveiled last week at the Phillip and Patricia Frost Museum of Science in Miami and has already almost completely melted. The message? “More Heat, Less Beaches.” According to Zubi’s Executive Creative Director Iván Calle, the hope is that people will stop and think about how sea-level rise and coastal erosion caused by rapidly warming temperatures and seas not only threatens the quality of life in the state but also Florida’s tourism-driven economy.

The second sculpture – to be unveiled this Friday at ZooTampa at Lowry Park – is of a Florida Panther mother and cub. “Real panthers don’t actually melt,” continued Calle, “but we wanted to artfully show how extreme heat and other effects of the climate crisis, like rising seas, are a threat to their very existence, and that’s something all Floridians want to prevent.”

The third and final sculpture, featuring a grandfather and granddaughter enjoying a pleasant day on a park bench and called simply “Florida Family,” will be installed in front of Orlando’s City Hall next week. The idea is to connect Orlando’s globally famous tourist attractions and natural beauty to the legacy Floridians will leave behind for future generations.

“It’s not just our beaches that are slowly eroding or getting infested by algae blooms as a result of rising temperatures,” said Yoca Arditi-Rocha, CLEO’s Executive Director, “but also our wildlife and, ultimately, our very way of life in Florida. We need to understand that this is not just an environmental issue but in fact the biggest challenge to our livelihoods here. We’re all in this together as Floridians and we demand bold climate action from our elected leaders. We encourage everyone to take the Florida Climate Pledge to lend a hand.

The CLEO Institute’s #FlClimateCrisis campaign includes not only the three melting sculptures but also numerous events to highlight the multiple threats to the state’s quality of life. The campaign has won the support of several elected leaders from Florida, including Congresswoman Kathy Castor, who represents Tampa Bay in Congress and chairs the U.S. House Select Committee on the Climate Crisis. Asked about the campaign, the congresswoman responded that “The Sunshine State is uniquely positioned to lead the way to a clean energy economy, one that will create millions of family-sustaining jobs and protect our communities from extreme heat, climate-fueled hurricanes, and sea-level rise, all while ensuring environmental justice for every American. Climate solutions can save lives and put money into the pockets of consumers as we create a healthier, more vibrant nation for generations to come.”

Following are the remaining events that The CLEO Institute has planned for September: 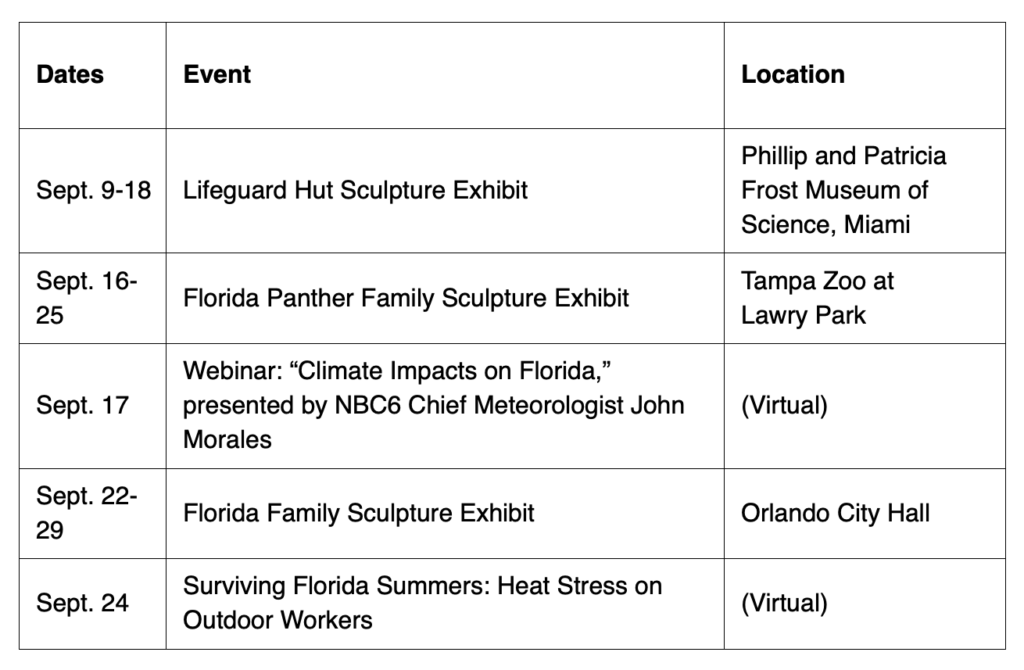 The Florida Climate Crisis campaign has been made possible via a grant from the VoLo Foundation, a private, Florida-based philanthropic foundation led by Thais Lopez Vogel and David S. Vogel that seeks to accelerate change and global impact by supporting science-based climate solutions, enhancing education, and improving health.

“This year’s temperatures around the world are among the highest ever recorded,” remarked VoLo’s Thais Lopez. “That trend will continue and accelerate if we don’t take collective action and rein in warming emissions. By working together and listening to our climate scientists, Floridians can limit days of extreme heat and sea-level rise and save the state they treasure.”

People seeking more information about the wax sculptures and The CLEO Institute’s month-long focus on the numerous ways in which climate change is threatening Florida are encouraged to visit FlClimateCrisis.org. The public is invited to ask questions and comment on social media using the hashtag #FlClimateCrisis.

About The CLEO Institute
Founded in 2010, The CLEO Institute (CLEO) exists for the sole purpose of building climate literacy and spurring climate action. As the only nonprofit, nonpartisan organization based in Florida that is exclusively dedicated to climate change education and engagement, CLEO is viewed as the go-to regional source for credible, vetted climate science and expert insights into a variety of fields impacted by climate. The CLEO Institute is a 501(c)(3) working with communities across Florida to build climate literacy and mobilize climate action for a resilient future. Learn more at cleoinstitute.org.

About VoLo Foundation
VoLo Foundation (VoLo) is a private, non-operating foundation in Jupiter, Florida. VoLo believes in developing knowledge and sharing information that has the potential to create a global impact. Through original research and analysis, and in collaboration with philanthropic and academic partners, we aim to enrich the lives of individuals, strengthen communities, and educate future generations. Learn more and subscribe to VoLo Climate News at volofoundation.org.

About 1stAveMachine
1stAveMachine is a mixed media production company and storytelling outfit. They create video, digital, and experimental content for TV, print, web, and mobile, all with a unified singular vision. They have won numerous awards since their formation, including Gold, Silver, and Bronze Cannes Lions, AICP, One Show, and ANDY awards, and many others. Their work has been featured across the globe and during the Super Bowl, and their division 1stAve Content has been instrumental in pairing the perfect influencers and creators with agencies and brands.