From One Black Man to Another: Vote

That’s the point from a group of black elected officials, who are
pushing an event Sunday at an early voting site: Each 1, Bring 1.

Black men who are or have been in elective office have a clear message to all black men as the country heads toward November 3: vote. 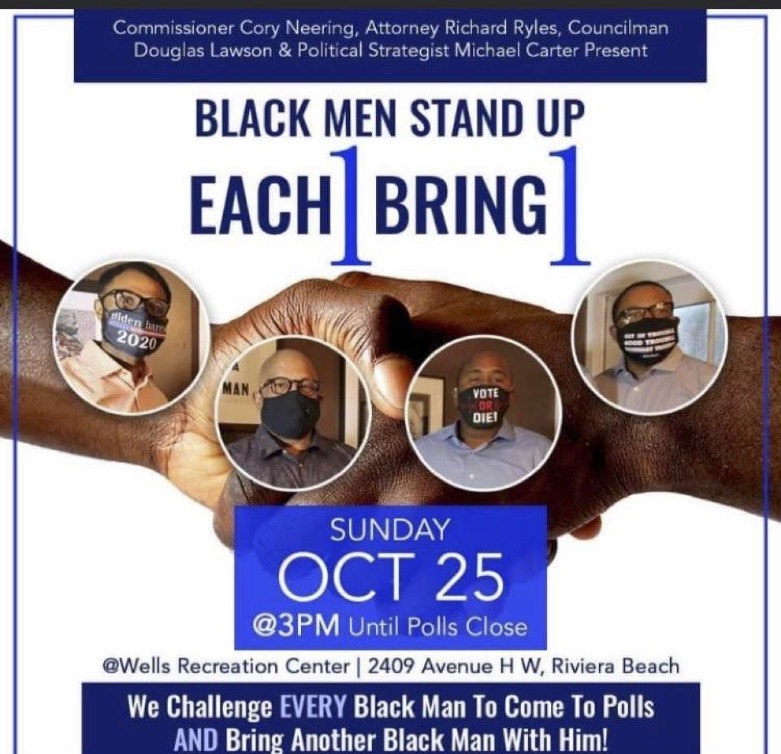 Not so they can be re-elected, but for the change they say they—and other black men—want to see all over this country and in Palm Beach County (PBC). Indeed, they have organized a call-to-arms event, Black Men Stand Up: Each 1, Bring 1, at 3 p.m. this Sunday, October 25 at Wells Recreation Center, 2409 Avenue H West, an early voting site.

They want a black man to go vote and to take another black man with him.

“We organized this event in order to mobilize black men to vote in this election,” said Attorney Richard A. Ryles, who has served a term on the West Palm Beach (WPB) City Commission. “Our survival requires us to be organized like at no other time in history. In other words, all hands on deck.”

Besides Attorney Ryles, who is also president of the Democratic Black Caucus of PBC, current WPB City Commissioner Cory Neering and current Riviera Beach City Councilman Douglas A. Lawson are, together, calling for 500 black men to join them at the early voting site.

Councilman Lawson hosted a Protest to the Polls caravan last Sunday in his hometown. He said it is critically important that, with so much happening related to black men—police brutality, systemic injustice—they show up at the polls.

“Yet it’s been primarily black women out front on these issues. But now we’re calling black men to take the lead, with our families and in our communities, and vote with us,” Councilman Lawson said, “and we’re going to be there until the last man votes.”

And, as Commissioner Neering noted, it’s important for each man to not only spread the word and go himself, but to also bring another man with him. Hence, the event title: Black Men Stand Up: Each 1, Bring 1.

Click here for a copy of the event flyer.

What: A push to see action at the voting booth: Black Men Stand Up: Each 1, Bring 1
Who: Important men and elected officials, including Attorney Richard A. Ryles, WPB City Commissioner Cory Neering and Riviera Beach City Councilman Douglas A. Lawson
When: 3 p.m. Sunday, October 25, 2020
Where: Wells Recreation Center, 2409 Avenue H West, Riviera Beach
Why: To ensure that, with all the issues happening around the country and in Palm Beach County, change must come–and it happens through voting. Black men, go vote.
Share this article! Share on FacebookShare on Twitter

Amid a growing concern for the health and safety of children in public schools across the country, State … END_OF_DOCUMENT_TOKEN_TO_BE_REPLACED