As Sullivan received his bachelor’s in agricultural business/economics, seated in the Al Lawson Jr. Multipurpose Center and Teaching Gymnasium were his parents, stepdad Curtis Peterson, mom, Tova Peterson, sister, Tyra Peterson, and grandmother, Betty Wilborn, who drove up from Gainesville, for the fourth in-person commencement ceremony over the weekend.

Because of guest limits due to the coronavirus pandemic, many of those who would have been cheering for Sullivan in the auditorium were more than 150 miles away. Sullivan is one of the first college graduates who emerged from the Manhood Youth Development Foundation, Inc.’s Project Manhood 2015 program in Gainesville.

“This is a moment of pride and joy to see one of our own achieving success on the ‘Highest of Seven Hills,’” said Charlie Ray Jackson, president of the Manhood Youth Development Foundation. Inc., and a 1979 FAMU graduate. 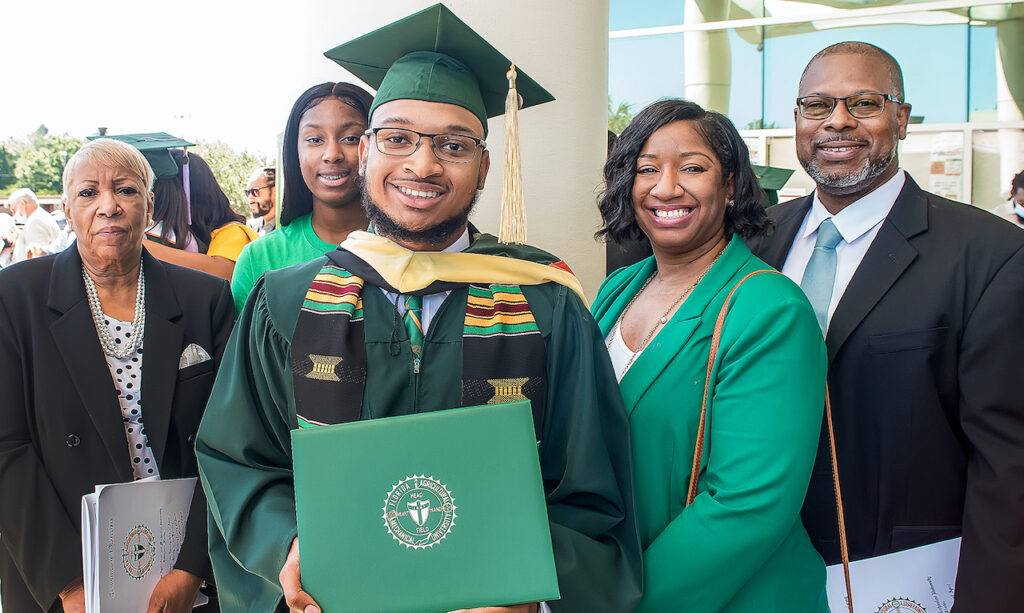 Sullivan is an honor graduate from the Alachua County Public Schools and has been closely associated with the local Alachua County FAMU Chapter Alumni Association. He was the first president of the Youth Component of the Manhood Youth Development Foundation, Inc.

“I have nothing but appreciation and gratitude for the opportunities presented to me through the program and the lifelong skills they have taught me,” said Sullivan, who cited time management, how to dress for an interview, being a gentleman, public speaking, conflict management, and being able to think critically and on your feet as the skills he learned. “The Manhood program prepared me well for matriculation through college. It also gave me a strong foundation for becoming an adult.”

The objectives of Manhood Youth Development Foundation, Inc., include teaching young men to become productive citizens, exposing them to life skills and employment opportunities; visits to colleges and universities; promoting self-respect for women; and introducing them to the justice system and coaching them how, if stopped, to interact with law enforcement.

Project Manhood 2015 was started in 2011 under the leadership of the North Central Florida Chapter of the National Forum for Black Public Administrators (NFBPA) and Omega Psi Phi Fraternity, Inc.

While in high school, Sullivan was enrolled at Santa Fe College and gained college credits before he enrolled at FAMU.

“He is one of our mentees since elementary school, and we are very proud of what he is able to achieve in light of these difficult days that Black males are experiencing,” said Jackson, who is a member of NFBFA. “Miles is a true success story.”

Sullivan plans to work in the agribusiness sector and wants to advocate for those who live in food deserts and are faced with food insecurity. He said the pandemic has made the problem worse for many people.

“Your diet affects your mental state,” Sullivan said. “I want to be able to show people what they can do to improve their mental state during a crisis.”