The men and women from the Tallahassee Fire Department USAR Task Force 7 are among the Urban Search and Rescue (USAR) teams from across the state who have deployed and are currently searching for survivors in the Surfside collapse site.

Cynthia Harris, Ph.D., associate dean for public health and director of the Institute of Public Health, said O’Dare is contributing to the “dire need for addressing the mental health stressors that adversely impact our first responders.”

“She answered the local state, national and international public health call to immediately respond to the needs of firefighters in the wake of this tragedy,” Harris added.

O’Dare, founder and director of the 2nd Alarm Project, has been deployed to the scene of the condo building collapse to help support the wellness needs of first responders both before, during, and after the deployment.

“Disaster response deployments require a high level of mental and physical effort from emergency service professionals,” said O’Dare, an IPH assistant professor in health and policy management. “The physical, social, and psychological demands of disaster response work can become overwhelming, and without mitigation, contribute to longer term behavioral health and substance use issues.” 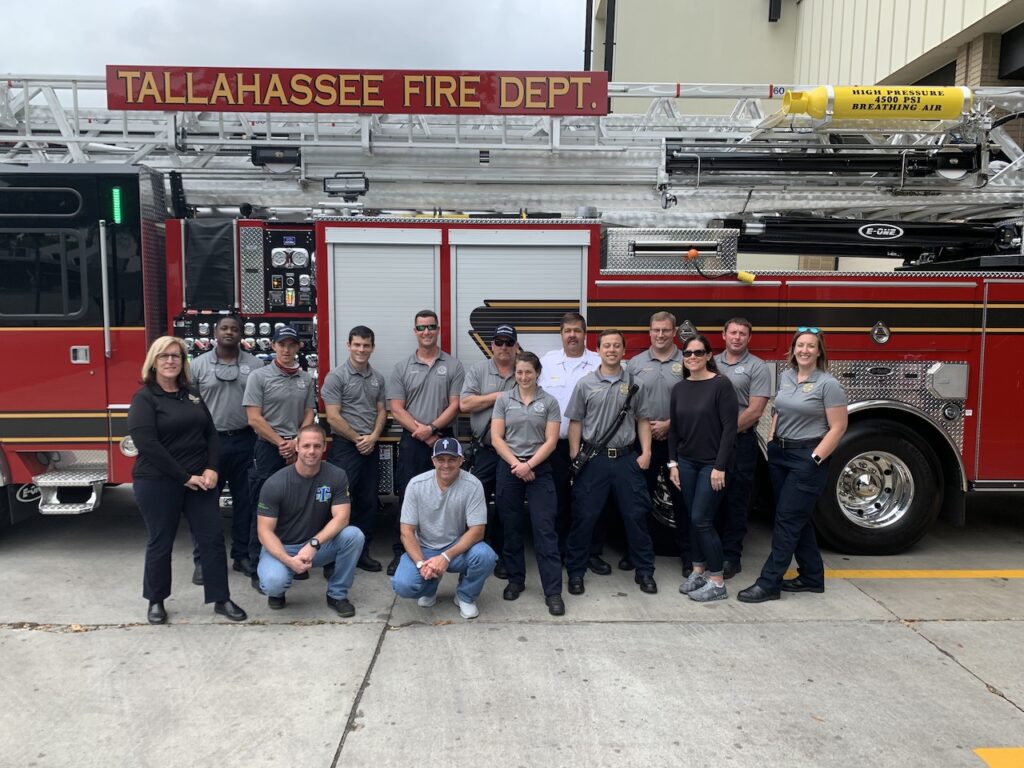 Founded in 2019, the 2nd Alarm Project is a multi-faceted, evidence-based outreach and intervention approach to address the behavioral health and substance use needs of first responders in the Florida Panhandle. The project originated out of a request from Tallahassee Fire Chief Jerome Gaines for assistance to address the mental health needs of fire fighters and other first responders, in the wake Hurricane Michael and other major events.

“The science demonstrates that the mental health needs of first responders look a little different if they are going to be effective,” said O’Dare, who approaches the issue from the perspective of a trained social worker who grew up in a family of fire fighters and is married to a fire fighter.

The 2nd Alarm Project is funded primarily through a grant from the Substance Abuse and Mental Health Services. O’Dare will oversee and provide direct support to USAR Task Force 7 members and support peer team members on the scene.

As part of the deployment, O’Dare will work with the State Fire Marshal’s Office and the Florida Firefighters Safety & Health Collaborative on a state plan for psychological first aid of first responders both during the deployment and upon demobilization of the USAR teams.

“Seeing suffering and devastation of a disaster, along with repeated exposure to grievously injured and deceased persons, as well as recovering human remains, can increase feelings of cynicism and hopelessness among responders,” O’Dare said. “The mental wellness and resiliency of our first responders has become a priority and recognizing the need for psychological education, access to competent resources, and follow up to those members exposed to these potentially traumatic events.”

Peer support among disaster responders can improve mission readiness and preserve the force during deployment, as well as mitigate longer term consequences of disaster response work, including PTSD and other mental health concerns, O’Dare explained.

“Peer support is a vital component of mitigating issues among first responders,” she said.