You are here: Home / People / From Homeless to Hired

As one of the largest employers in town, locals depend on the Winn-Dixie supermarket for jobs, as well as groceries. Jessie Williams is one of the store’s longest tenured employees, working there for 14 years.

“I like working inside and outside the store. I bag groceries and keep carts,” Williams said.

Williams has a developmental disability. October is National Disability Employment Awareness Month, and APD is highlighting the workplace achievements of people with disabilities and the employers that hire them.

Before he started his job, Williams was homeless. Working with his care team, he learned how to cook meals, and over time gained independence in his daily life and moved into his own apartment. Vocational Rehabilitation helped give him the skills needed to succeed on the job. 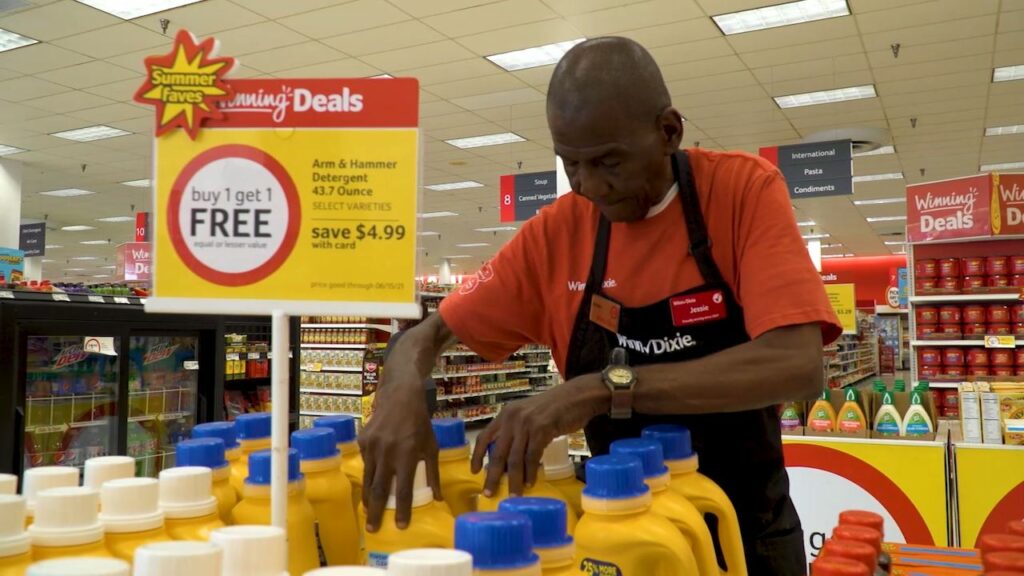 Job Coach Ruby Mitchell of the local Wings of Love agency calls Williams a shining star. “He started out collecting carts and moved up to bagging groceries, assisting people with loading them. The customers and employees know who he is. He is a joy to work with.”

Williams says he enjoys making friends at the store with both customers and other employees.

“He’s just a really friendly, outgoing guy. Happy to please. He’s even a bit of a joker and fits right in,” Store Manager David Moyes said.

Moyes also admires Williams’ productivity. “He is always on time, very diligent, always looking for more work. Work ethic is a huge part of what we do at a grocery store. It’s a wonderful luxury to have someone willing and eager to come to work.”

In his spare time, Williams enjoys spending time with friends. He says he plans to continue working for many years to come.

APD supports people with developmental disabilities to live, learn and work in their communities. The agency annually serves more than 58,000 Floridians with autism, cerebral palsy, spina bifida, intellectual disabilities, Down syndrome, Phelan-McDermid syndrome, and Prader-Willi syndrome. For more information about the Agency for Persons with Disabilities, visit APDcares.org or call toll free 1-866-APD-CARES (1-866-273-2273).

IN CASE YOU MISSED IT In a recent op-ed published by the Northwest Florida Daily News, former state … END_OF_DOCUMENT_TOKEN_TO_BE_REPLACED