You are here: Home / Government / Floridians for Reproductive Freedom Mobilize Over 10,000 Statewide

In concert with nationwide marches, Floridians for Reproductive Freedom
sends a bold message to the Florida Legislature from Pensacola to Miami.

Florida has long been a safe haven for abortion in the South, but some Republican legislators have worked to chip away at that safety every session.

Charo Valero (she/her), State Director of Latina Institute for Reproductive Justice Florida says, “We couldn’t be more proud of the thousands of folks across Florida who showed up for reproductive freedom and against abortion bans in our country and state. Politicians who try to block access to abortion are not only on the wrong side of reproductive justice, they are also on the wrong side of public opinion. We will continue to build power in our communities to ensure that our voices are heard.”

Laura Goodhue (she/her), Executive Director of the Florida Alliance of Planned Parenthood Affiliates says, “Every year in Florida politicians chip away at our access to reproductive health care. This year, they’ve already introduced a copycat of the Texas abortion ban and we know this won’t be the only abortion ban bill we see in Florida this year. Last Saturday was a preview of the opposition Florida lawmakers will confront by moving any abortion ban in Florida. The bill already filed would outlaw abortions even before a person knows they’re pregnant, overturning 48 years of constitutional rights. An entire generation of Floridians do not know what it is like to lose their right to bodily autonomy and they will continue to protest in the Capitol, in their communities and at the ballot box.”

Representative Robin Bartleman (she/her, D-104) who publicly shared her abortion story during Florida’s legislative session, attended the Ft. Lauderdale march. She emphasized “I thank God everyday every single day that I had that choice. That was my choice. That was a choice between me, my husband, my doctor, and my good. It was not a choice involving politicians…. I am here today to make sure that every woman continues to have that choice.”

Jasmen Rogers (she/her), Founder of Folding Chair Consulting and Statewide Coordinator of the Florida March for Reproductive Freedom says, “Over 11,000 Floridians took to the streets across the state in dozens of counties. There is an undeniable righteous anger brewing towards the Florida Legislature prioritizing cuts to reproductive healthcare in the middle of an ongoing pandemic. This moment cannot be ignored and should not be taken lightly by the Florida Legislature. We look forward to seeing them in Tallahassee.”

The coalition of organizations who planned the events on October 2nd, look forward to mobilizing with the same fervor in the Florida Capitol during Florida’s Legislative Session. 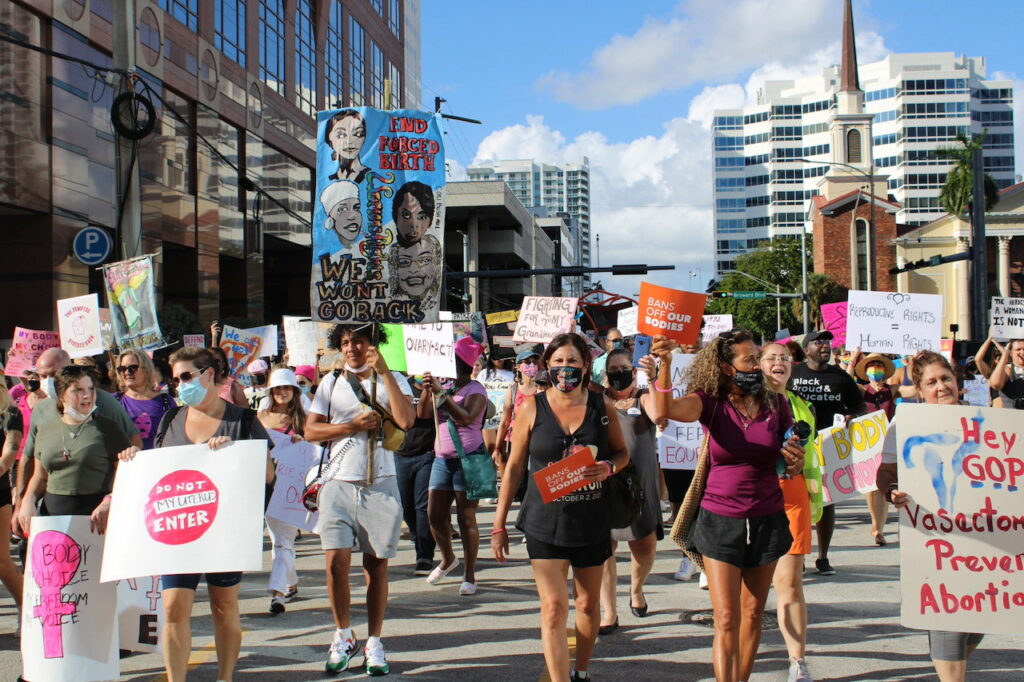