The two conducted rehearsals in December on the FAMU campus as they prepared for the opening of the 90-minute production based on the life of Robinson, considered to be the greatest pound-for-pound boxer of all time. The play opens Friday night, January 7, at the Gene Frankel Theater in New York City and is scheduled to run through January 23.

Wilson, a Tallahassee native, former Marine and a father, seemed fated to play the legendary boxer. When he was working at a New York City restaurant location once owned by the former champion, many customers mistook Wilson for Sugar Ray Robinson, who was depicted in a mural above the bar.

“Sugar Ray was an entertainer; he was flashy; people loved him as a person. No matter what Sugar Ray did, people loved him,” Wilson said. The essence of the person being portrayed is a man who was strongly influenced by the women in his life but failed by the people he trusted.

“Sugar Ray had a mother who pushed him to do his best. When no one else believed in him, she pushed him,” Wilson said. “Sugar Ray had his issues. He died broke. People who don’t know him think he partied all his money away, but he trusted the wrong people.”

Robinson’s story has contemporary lessons. Many athletes and entertainers are swindled by their managers and accountants, Wilson said.

“It’s still happening today,” he added. “This story allows Sugar Ray to explain the triumphs and failures of his life and what he was going through.” 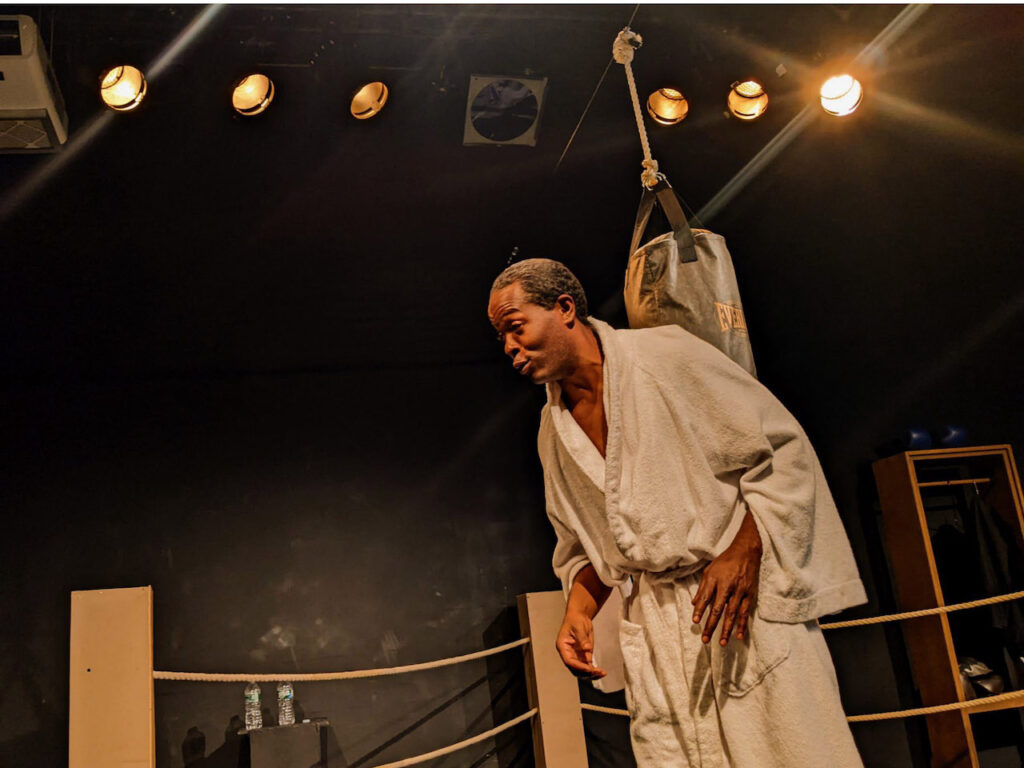 Robinson’s topsy turvy life and career resonate with the actor. Wilson attended FAMU for about a month in 1994 before dropping out.

“I wasn’t ready for school. I was immature. I was wild,” said Wilson, who joined the Marine Corps to get “some discipline and I calmed down a little bit.”

After military service, Wilson returned to Tallahassee and, in 1998, re-enrolled in FAMU to study theatre.

“I saw Mr. Wells and I told him I was ready to come back to school,” Wilson said.

Wells, a professor in the Department of Visual Arts, Humanities and Theatre and associate director of Theatre, directed Wilson in various campus productions before his student left FAMU again after a few semesters and got married. Wilson returned to the Tallahassee campus in 2006 and completed his degree on Aug. 8, 2008. Ten days later, he entered the University of Florida graduate school, where he earned the Master of Fine Arts in Theatre.

While he was completing his master’s, Wilson had an internship in New York City with the legendary producer and director Woodie King Jr. Years later, when Wilson was running the Harlem Besame restaurant, King would be instrumental in boosting his acting career.

After restaurant owner Bernard Rubie offered to help Wilson’s career, he reached out to King to host a dinner theater. When King visited Harlem Besame, a location formerly occupied by Robinson’s restaurant, he mistook the image of Robinson in the restaurant mural for Wilson.

“I said, ‘that’s not me. That’s Sugar Ray,’” Wilson said. “People came to the bar every day and asked me that question.”

The Wells and Wilson collaboration seemed destined to happen after the FAMU professor saw his former student perform an excerpt of the play in Chicago, and Wilson relocated to Florida to handle family affairs.

“It was a presentation of Sugar Ray in a flashy suit and being the life of the party,” said Wells, who wanted the production to delve deeper. “I said, ‘You need to be Sugar Ray. You need to have memories.”

The production explores Robinson’s dementia before his death in 1989.

“I’ve always seen this as a memory play,” said Wells. “It allowed us to explore the early stages of Sugar Ray’s Alzheimer’s through his story.”

Once Wells decided to workshop the script with Wilson, the suit went away.

“When the suit went away, I knew we were able to get knee-deep into the script,” Wilson said of the collaboration. “It’s a challenge working with Mr. Wells. He always pushed me to get to the end, to finish it. Sugar Ray is a challenge.”