On behalf of the Government of Japan, the Consul General of Japan in Miami, Kazuhiro Nakai, had the honor of presenting the Decoration of “The Order of the Rising Sun, Gold Rays with Rosette” to Team Volusia Economic Development President Keith A. Norden, who is also the longest serving volunteer chairman of the board of Florida Delegation, Southeast U.S./Japan Association, Inc. (‘SEUS/Japan’).

The prestigious honor, granted by the Emperor of Japan, is conferred to meritorious Japanese citizens and foreign nationals who have made significant contributions in the promotion of friendly bilateral relations between Japan and foreign countries.

“Mr. Norden has built a wide and robust network of business development partners statewide and has been one of the most effective promoters of Japanese business in Florida,” said Consul General Nakai. “He has wisely leveraged this network to help Japanese companies considering expanding their business footprint by consulting on business sites and introducing them to local leaders,” he added.

The conferment ceremony was held at the Consul General’s official residence in Coral Gables in the presence of Norden’s family and co-workers, consulate officials, and representatives of the Florida Delegation, Enterprise Florida and regional economic development groups. 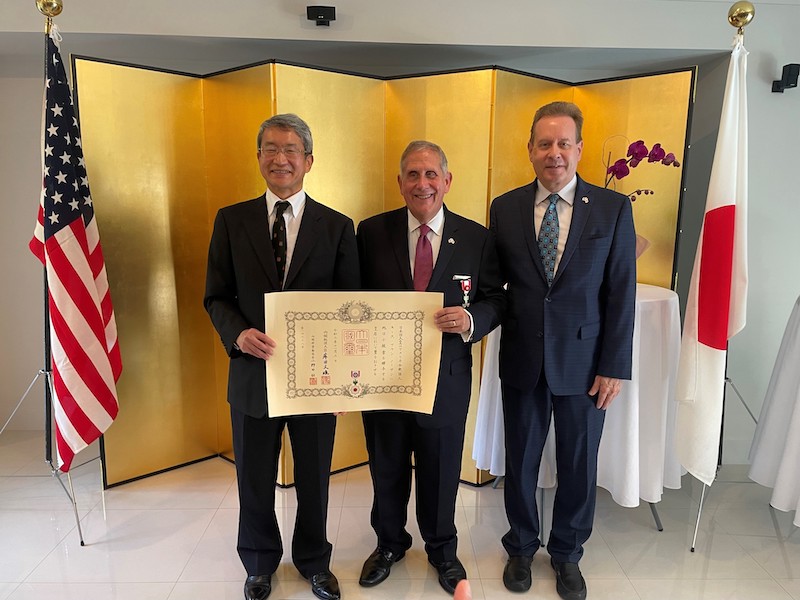 Norden’s engagement with the Japanese business community started when he joined the Japan-Virginia Society in 1992 and dedicated himself for 16 years to linking and expanding friendship between Japanese citizens and the local community. After relocating to Florida in 2009, Mr. Norden joined the Florida Delegation of SEUS/Japan Association and assumed the Chairmanship in September 2014. During his service, Norden attended joint meetings in Birmingham, Alabama in 2015 and in Tokyo in 2018.

“It is my great honor to receive this prestigious order from the Emperor of Japan and to have worked with Japanese partners for more than 30 years,” said Norden. “Japan remains the world’s third largest economy, our nation’s top foreign direct investment (FDI) country, the fourth largest trading partner and export market, and Florida’s fifth largest trading partner with over $6.6 billion in bi-lateral trade and of FDI, and Chairman Norden has done an outstanding job, through his many years of dedicated service on our board, of helping our organization and the state of Florida promote and expand friendly business ties with Japan,” added SEUS/Japan’s executive director, Dave Woodward

The mission of SEUS/Japan, since its founding in 1975, has been to promote trade, commerce, investment, and friendly relations in the areas of culture, industry, technology, and commerce, between Japan Florida and six other southeastern member states (Alabama, Georgia, Massachusetts, North Carolina, South Carolina, and Tennessee). SEUS/Japan has individual, NPO and corporate membership programs open to all Florida individuals NPOs and businesses.

Florida will officially host the 44th Annual SEUS/Japan and Japan-U.S.S.E Associations’ Joint Meeting Program in Orlando on November 16-19, 2022 under the 14-year rotation system. This joint meeting program is held each year between the SEUS/Japan and Japan-U.S. Southeast Associations, alternating between sites in Japan and the seven Southeastern member states and SEUS/Japan plans, organizes and coordinates Florida’s participation in the program and its hosting of this important event every 14 years . This year’s gathering will be the first in-person meeting in the past three years due to the COVID-19 pandemic, and is expected attract 400-500 Japanese and Southeast U.S. executives, governors of the seven SEUS/Japan member states, the representatives of the Japanese diplomatic/consular missions in the United States, economic development officials and senior executives from major Japanese firms.

For more information about the Consulate-General of Japan in Miami, visit http://www.miami.us.emb-japan.go.jp/itprtop_en/index.html or call (305) 530-9090.

For more information about SEUS/Japan, its annual joint meeting and membership programs, please call (786)-235-8289 or visit online at www.fl-seusjapan.org.