You are here: Home / Soup Du Jour / Alarming New Survey Shows Serious Knowledge Gaps Among Americans About the Holocaust, Including Belief That Horrific Chapter Was Exaggerated

At a time when the horrors of the Holocaust are again on the minds of Europe and the world, an alarming new survey shows widespread misunderstanding – and even real doubts – among a surprisingly large number of Americans regarding the darkest chapter in modern world history. The survey, conducted for the Holocaust Education Resource Council (HERC), underscores the need for continued and strengthened education to make sure that genocidal outrage is never again repeated or accepted.

Despite decades and volumes of documented evidence about the Holocaust, even as Americans prepare to observe Holocaust Remembrance Day (Yom Hashoah in Hebrew) on Thursday, April 28th, the survey reveals that 1 in 10 Americans believe many historical details about it have been altered or exaggerated, or that the Holocaust is actually a myth. At least 6 million European Jews were killed in the Holocaust – a number unknown to one-third of Americans – and sadly, almost 1 in 5 Americans (18%) believe Jews were at least partially responsible for what happened to them during the Holocaust.

“More than 60% of European Jews were erased from existence by the Nazis’ unimaginable evil, and all decent people everywhere have a responsibility to make sure they are not erased from memory,” said U.S. House Ethics Committee Chair Rep. Ted Deutch (D-FL), who will become CEO of the American Jewish Committee in October. “We must all do our part to educate future generations about these horrors, or else the world could be doomed to repeat them.”

Beyond what Americans understand or believe about history, 41% report having seen Nazi symbols in their communities or online in the past five years. And even more than the portion of Americans who doubt the Holocaust’s veracity are the 1 in 4 (24%) who believe that this part of history has been used by Jews to advance an “agenda” or goal in at least one way, including political affairs, finance and business, or media.

The HERC survey found that 93% of Americans believe it is important to continue teaching about the Holocaust, and 80% believe something horrific like it could happen again. Despite this commitment to knowledge, the survey also found that 1 in 5 (21%) Americans don’t know that the Holocaust occurred during World War II and 1 in 4 (25%) can’t correctly identify the notorious Auschwitz as a concentration camp.

“The Holocaust decimated almost an entire population of innocent people, all in the name of advancing a vile philosophy of hatred,” said Barbara Goldstein, Executive Director of HERC. “The next generation is our hope for a better world, and this survey shows that education is still our best tool against hate.”

Florida-based HERC is one of the nation’s leading authorities on Holocaust education. Its mission is to provide instructional guidance, support, and resources for educators who teach the history of the Holocaust, as well as educational programs for the community at large.

“These survey results are tremendously important. It’s good to know that the majority is aware that a tragedy like the Holocaust could happen again – but the fact that 10% of those polled believe something about the Holocaust was falsified is truly disturbing,” said HERC President Elizabeth Ricci. “HERC is deeply committed to its noble and necessary mission work to educate students about the history of the Holocaust so that a similar catastrophe can never happen again.”

The survey of 850 adults across the U.S. was conducted by Sachs Media on April 21, 2022. Follow this LINK for a full summary of the survey results. 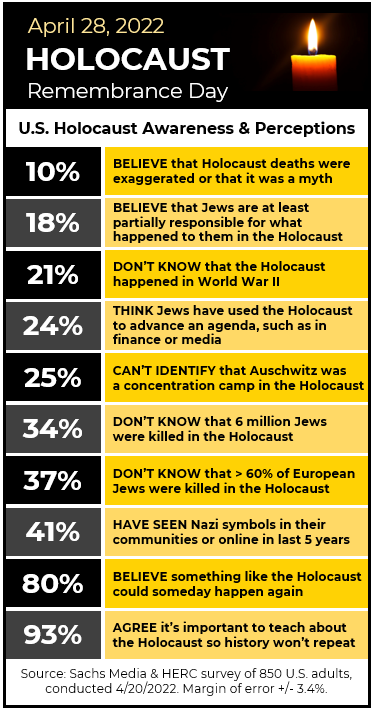