You are here: Home / Education / Seven scholarships awarded at Power of the Purse fundraiser, event dedicated to co-founders Cooper and Carmichael

The annual Flagler College Power of the Purse fundraiser was once again an unparalleled success, attracting over 340 enthusiastic supporters to the College’s historic Ponce de Leon Hall on May 9.

The sold-out event kicked off with a cocktail/mocktail reception, a silent auction of designer purses and a jewelry raffle and culminated with a luncheon in the Grand Dining Room, including memorable comments from several noteworthy speakers.

In its fifth year, the Power of the Purse serves as the signature fundraising event for the Flagler College Women of Vision Advisory Board, which is comprised of philanthropic women focused on ensuring scholarship opportunities for female students at the College. Seven scholarships were awarded this year, the number having grown each year since the inaugural fundraiser at which two scholarships were given. Funds raised from the Power of the Purse are also used to grow the Women of Vision endowment fund.

This year’s event was dedicated to the Women of Vision co-founders, the late Robin Cooper and Dr. Beverly Carmichael, the latter recently retired as Flagler’s Vice President of Institutional Advancement.

“These two remarkable women spearheaded the effort to launch the Women of Vision Fund in 2014,” said Women of Vision Advisory Board Chair Kathi Keller. “No one ever imagined it would be such a success.” 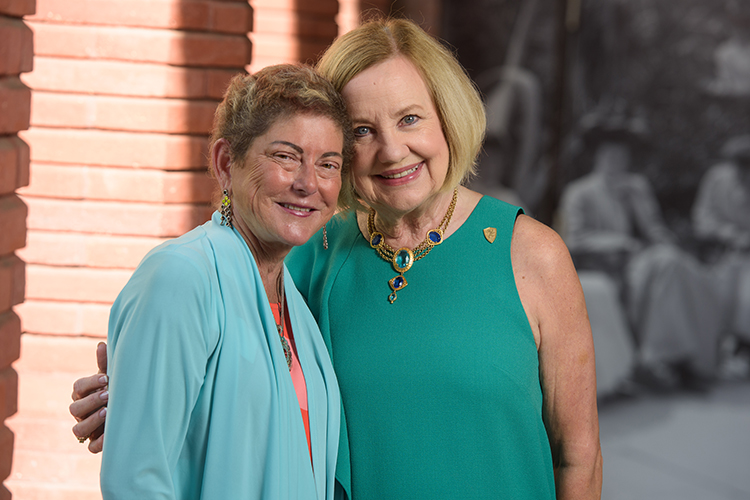 The Power of the Purse luncheon was dedicated to its co-founders,
Robin Cooper and Dr. Beverly Carmichael. Photo Credit: Monarch Studio

Power of the Purse Chair Linda Allen-Hawkins expressed her gratitude saying, “We would like to thank all the active participants in today’s event, including the Women of Vision Advisory Board, committee members, donors, sponsors and in-kind sponsors. We are so blessed with your generosity.”

Featured speaker for the event was Sylvia Longmire, an accessible travel writer, travel agent, author and entrepreneur who is also a service-disabled veteran, single mother and the former Ms. Wheelchair USA 2016. She travels around the world in her power wheelchair, usually solo, and writes about the accessibility of her destinations on her travel blog, “Spin the Globe.”

In her speech, entitled “How Fear, Laughter and Travel Will Set You Free,” Longmire asserted that traveling alone is the most liberating thing she has ever done.

“I can go where I want, when I want and how I want,” she said. “But the real gift of solo travel is the interaction you have with people that you wouldn’t normally meet when you have a companion for constant conversation. And I consider my wheelchair to be the instrument that provides me with freedom of movement, not a limitation.”

Longmire offered her audience her favorite travel tips which included: have zero expectations of your destination; don’t be a tourist, be a traveler; be positive and make the best of any bad situation; venture off the beaten path; let people help you and allow people to be kind; ask to be taken to where the locals live and work – beyond the “Disneyland” façade; don’t judge others based on the actions of their governments.

She concluded by saying, “I implore you to go forth and venture into the world. You will be afraid, but go anyway. Soon, your soul will be on its way to real freedom.”

Power of the Purse luncheon attendees were also treated to inspiring comments by rising senior Morgan Hutchison, winner of the newly created Robin Cooper Memorial Scholarship. Hutchison is a media studies and sociology double major whose principal focus is to increase awareness of the problems associated with mental illness and to help eliminate the stigma which surrounds it.

Since arriving at Flagler College, she has helped found a chapter of the National Alliance on Mental Illness, setting up meetings, expert panel discussions, mental health first aid training and a mental health fair. As president of the organization next year, Hutchison hopes to carry on this mission.

“I hope to use my degree in communications to learn how to use television, film and social media to help the users’ mental health,” said Hutchison. “I’d like to earn my master’s and doctoral degrees in media, communications and cultural studies and someday return to Flagler College as a professor to share what I have learned.”

“Morgan Hutchison exemplifies Robin Cooper’s legacy of generosity and genuine concern for others,” said Kathi Keller. “She is an ideal recipient of the new scholarship named for Robin.”

For information about supporting the Women of Vision Fund, visit flagler.edu/wov.

Additional photos of the event can be found here.

About Flagler College
Celebrating its 50th anniversary this year, Flagler College is a small private, independent college located in St. Augustine, Fla. The college offers 33 majors, 39 minors, and a master’s degree in Education of the Deaf/Hard of Hearing. Flagler College has an enrollment of about 2,500 students, as well as an offsite campus in Tallahassee, Fla. U.S. News & World Report and The Princeton Review regularly feature Flagler as a college that offers quality education at a relatively low cost. A Flagler education is less than half the cost of similar private colleges, and competitive with many state universities. A relatively young institution (founded in 1968), Flagler College is also noted for its historic beauty. The centerpiece of the campus is the former Hotel Ponce de Leon, a National Historic Landmark opened in 1888 by railroad pioneer and Standard Oil co-founder Henry M. Flagler. For more on Flagler College, visit flagler.edu.