Governor Ron DeSantis today announced the Florida Civics and Debate Initiative with The Marcus Foundation for elevating civic knowledge, civic skills and civic disposition for middle and high school students. The Marcus Foundation has committed $5 million over a three-year period to the Florida Education Foundation to increase our students’ access to speech and debate programs. To show support for this initiative the Governor has requested $375,000 in the Bolder, Brighter, Better Future budget to implement this first-of-its-kind civics and debate initiative.

“Since taking office, my administration has introduced several major initiatives to affirm my commitment to public education in Florida, especially in improving Florida’s K-12 education system,” said Governor DeSantis. “By offering civic debate, we can better challenge our students to think critically and provide them with the knowledge of our nation’s founding principles and institutions. I hope that this initiative will have a strong impact on classrooms and school campuses across our state as we look to build a bolder, brighter, and better education system in Florida.” 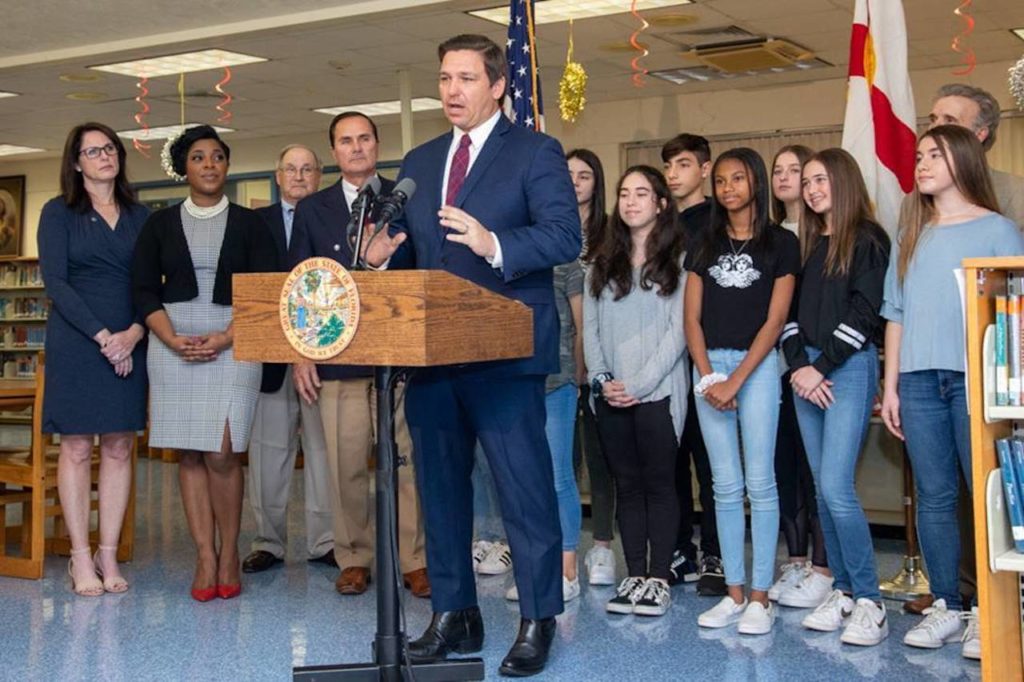 “I have long been a proponent of civics education in the classroom,” said philanthropist Bernie Marcus, chairman of The Marcus Foundation. “Every child needs to understand the ideals that our country was founded on. What Florida is doing to bring civics and debate to every student is very innovative and should be a model for the rest of the country. I applaud Governor DeSantis and Education Commissioner Corcoran for their leadership and vision and am glad to be a partner in this effort.”

“Thank you to Bernie Marcus and The Marcus Foundation for their generous contribution to the Florida Civics and Debate Initiative,” said Commissioner of Education Richard Corcoran. “This funding will empower Florida’s students to improve themselves, their education and their future through the profound impacts of speech and debate programs. Research shows that almost 100 percent of debate students attend college, and debate promotes higher level of student civic participation, creating civically engaged lifelong learners. Governor DeSantis has prioritized civics, and this initiative will be instrumental in providing students with the opportunity to become great citizens that will preserve our constitutional republic for future generations.”

The Florida Civics and Debate Initiative is expected to:

Florida Education Foundation
The Florida Education Foundation (FEF) serves over 200,000 educators, 2.8 million students, and over 3,600 schools throughout Florida and believes all students have equal value and should have access to a quality education to prepare them for a brighter future. As a valued partner in public education and a direct support organization for the Florida Department of Education, the FEF invests in high achievement for every student to contribute to Florida’s globally competitive workforce.

FEF’s primary purpose is to enhance and support educational excellence in all schools across Florida and values connecting with organizations that are also committed to strengthening Florida’s education system. FEF envisions a future in which every child graduates from high school ready to thrive in the next chapter of their life. Their programs and initiatives focus on systemic change and support the highest achievement for all of Florida’s students, educators, and leaders. They provide numerous opportunities to invest in events and programs that celebrate and elevate educators and encourage student success.

To learn more about the Florida Education Foundation, click HERE.

Over past month alone, Florida has gained more than 61,000 private sector jobs The Florida Department of … END_OF_DOCUMENT_TOKEN_TO_BE_REPLACED