Following the decision of the Texas Legislature to ban abortions and the Supreme Court’s
inaction, Florida leaders warn Florida electeds against making the same political move.

On Saturday, October 2nd, thousands of activists, community members, and electeds will gather from the Panhandle to Miami, uplifting the national fights for reproductive freedom.

About one month ago, the Texas Legislature voted on the most restrictive abortion legislation in the country, and it was subsequently signed into law by the Governor. Shortly after, Florida Senate President Wilton Simpson, threatened similar legislation, which was eventually filed by Representative Barnaby (R-27).

Rep. Anna Esakamani (she/her, D-47) says, “Florida Republicans have awakened the state by their gross, anti-reproductive health agenda. On Saturday we’ll join thousands of others across the state to march against abortion bans and for reproductive justice.”

Rep. Michele Rayner (she/they, D-70), “All people should be able to get reproductive healthcare that meets their needs throughout their lives and we’ll be making that message clear in the streets and in the Florida Legislature.”

Hon. Emma Collum (she/her), Chair of Ruth’s List Florida says, “We cannot continue to allow the Florida legislator to attack reproductive freedom and the Constitutional standard of Roe v Wade for political points. Floridians’ lives and safety are at stake and we have too much to lose by staying silent.”

Each march will uplift Black, Brown, Queer, Trans, working-class and incarcerated people who are all at heightened risk with cuts to abortion access.

WHAT: Florida Marches for Reproductive Freedom 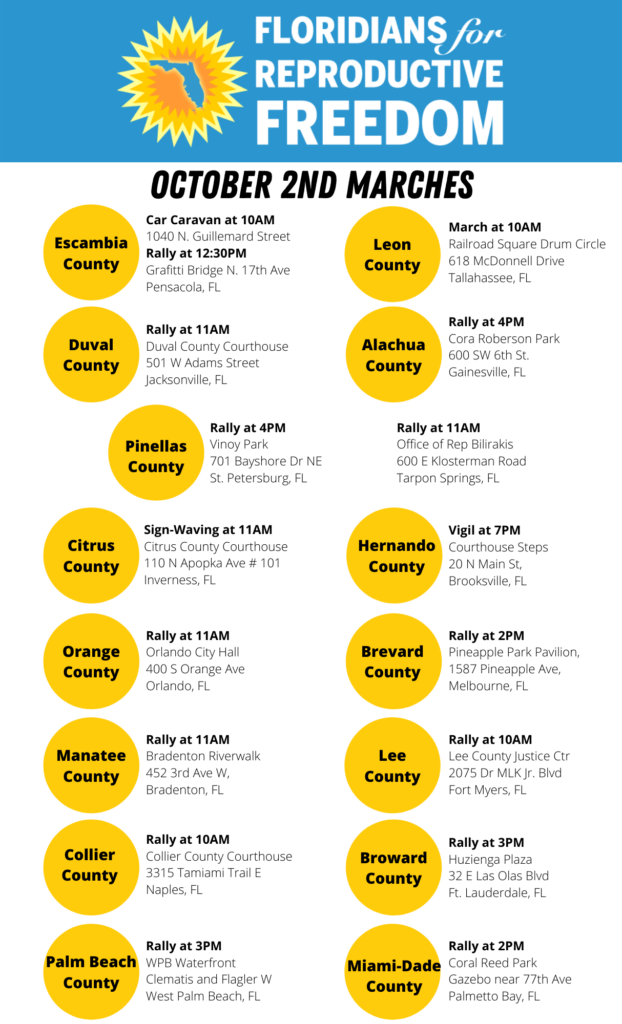