You are here: Home / Archives for Florida Polytechnic University

Students considering Florida Polytechnic University for their educational home this fall are now able to schedule an in-person visit to see its iconic campus up close in a safe way. END_OF_DOCUMENT_TOKEN_TO_BE_REPLACED

A team of Florida Polytechnic University students is using technology to convert the beauty and grace of dance into an innovative, stunning work of art. END_OF_DOCUMENT_TOKEN_TO_BE_REPLACED

While many events in the community have been canceled in the wake of the ongoing COVID-19 pandemic, one of Florida Polytechnic University’s richest student traditions will continue in a virtual environment. END_OF_DOCUMENT_TOKEN_TO_BE_REPLACED

For Andre Ripley ’19, Facebook provides much more than a way to stay connected to friends and family.

The social media and technology company is giving him a chance at a lucrative career and success as a tech entrepreneur.

Ripley, who graduated from Florida Polytechnic University with a bachelor’s degree in computer engineering, was awarded a $120,000 partnership deal with Facebook and Oculus VR to develop and run virtual reality gaming tournaments for the new Pistol Whip VR game. His company, Virtualities, will track elements such as players, prize money, teams, rules, and cheating.

“We negotiated with Facebook for probably four months and we finally closed the deal on New Year’s Day,” said Ripley, chief technology officer of the Salt Lake City, Utah, company. “That was a great start to the year.” 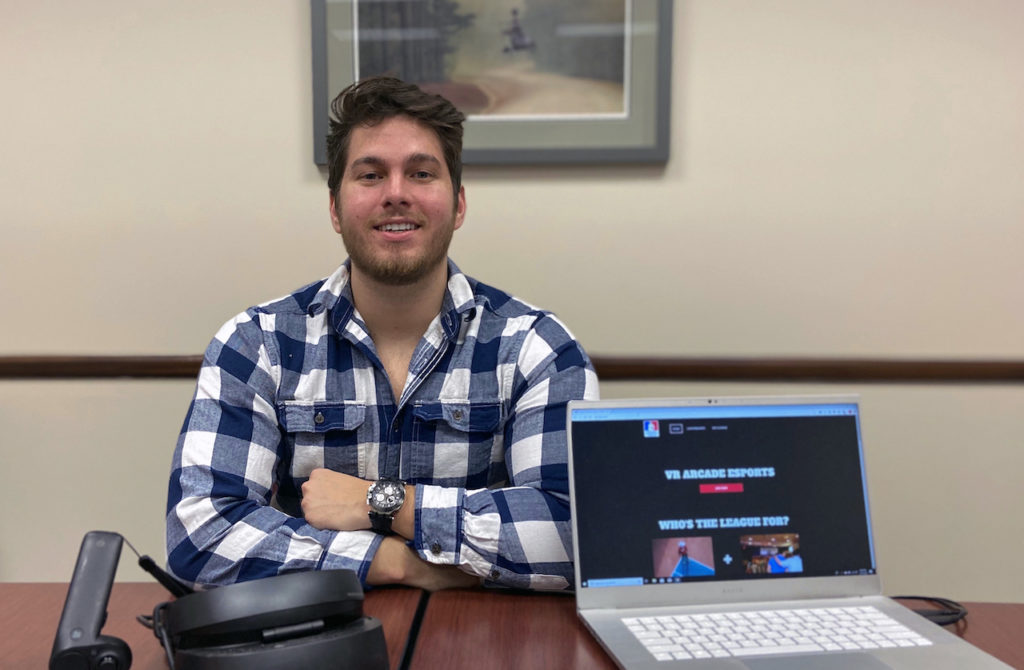 Andre Ripley ’19 is developing a software-as-a-service platform to host Pistol Whip virtual reality gaming tournaments as part of a $120,000 partnership with Facebook and Oculus VR.

Virtualities is hoping to land a $1 million deal with Facebook this spring.

“We have to launch our platform and meet all the requirements for Facebook and as long as we keep our platform running, we have a good chance of closing the million-dollar deal,” Ripley said. “We’re almost done and ahead of schedule right now.”

Ripley said the traditional way of running gaming tournaments involves many people working on spreadsheets to track scores and other data.

“That’s really outdated and hasn’t been automated. Since the demand for esports is getting higher, we’re trying to solve that with the Facebook deal,” Ripley said.

“With the power of Facebook, I can’t imagine how many people will compete in the Pistol Whip tournament, but we’re prepared for anything,” Ripley said. “I never expected to be funded by Facebook – my first round of funding was from my dad, who gave me $300 to develop a prototype for a box that does appraisals for diamonds.”

In addition to his work with the growing tech start-up, Ripley also works with flight simulators as a software engineer at Collins Aerospace in Salt Lake City.

Ripley discovered his passion for entrepreneurship at Florida Poly after being encouraged to enter – and win – several entrepreneurship competitions throughout Central Florida and the state. This included a third-place victory in the 2018 Governor’s Cup competition with his team’s product, Insta-List – a product that captured, scanned, and listed items for digital selling in less than 10 seconds. His collegiate victories earned him 20,000 LinkedIn followers and a thirst to continue his efforts.

“The single best thing I’ve done was getting involved with the entrepreneurship program at Florida Poly because you don’t even need to have the best idea or be completely thought through, you just have to try and get feedback,” Ripley said.

“Even when I’ve failed it’s like I’ve won because I got crucial feedback and I implemented it into the Facebook deal.”

For the first time, students and alumni will have representation on the Florida Polytechnic University Foundation Board of Directors. END_OF_DOCUMENT_TOKEN_TO_BE_REPLACED

A team of Florida Poly students is charging head-on into the design and construction of a real planetary rover that one day could traverse the terrain of Mars, collecting samples and providing a close-up look at places that have always been a mystery. END_OF_DOCUMENT_TOKEN_TO_BE_REPLACED

Florida Polytechnic University professor Dr. Ajeet Kaushik is determined to make detecting and treating diseases easy, accessible, and precise through the use of nanomaterials for biosensing and medicine. END_OF_DOCUMENT_TOKEN_TO_BE_REPLACED

New research at the Florida Industrial and Phosphate Research Institute (FIPR), a research entity within Florida Polytechnic University, could produce new sources of rare earth elements in the U.S. END_OF_DOCUMENT_TOKEN_TO_BE_REPLACED