You are here: Home / Archives for Gov. Rick Scott

The Public Opinion Research Lab at the University of North Florida has a new poll of likely voters that reveals Andrew Gillum in the lead for the upcoming gubernatorial election in Florida, with Ron DeSantis close behind, and Sen. Bill Nelson locked in a dead heat with Gov. Rick Scott in the upcoming Senate election for the state of Florida. END_OF_DOCUMENT_TOKEN_TO_BE_REPLACED 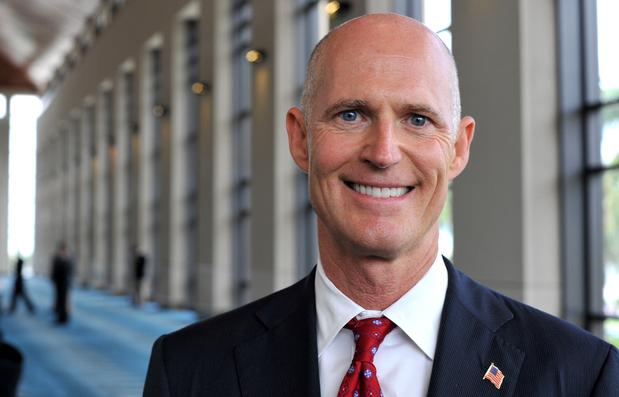 Today, Governor Rick Scott urged the legislative commission charged with granting spending authority to approve $340 million in federal funding to aid Florida’s citrus growers. Earlier this year, following months of Governor Scott fighting for critical funding and support for Florida’s citrus industry, the U.S. Department of Agriculture (USDA) announced $340 million in federal funding to aid the Florida citrus industry’s recovery from Hurricane Irma. Now that a grant for this funding has been approved in an agreement between the USDA and the State of Florida, it will be considered by the Florida Legislative Budget Commission (LBC) tomorrow. The block grant for Florida citrus is part of a more than $2.3 billion federal package approved earlier this year.

END_OF_DOCUMENT_TOKEN_TO_BE_REPLACED

The American Democracy Legal Fund today called for Gov. Rick Scott to immediately open an independent investigation following a report in the Tampa Bay Times that the state of Florida approved tens of thousands of applications for concealed weapons permits without performing a rigorous background check, allowing people with dangerous intentions or mental health problems to carry a gun in public.

END_OF_DOCUMENT_TOKEN_TO_BE_REPLACED

Judge Dawn V. Denaro, 51, of Miami, is a county judge for Miami-Dade County, and previously served as an Assistant State Attorney for the Eleventh Judicial Circuit. She received her bachelor’s degree from Tulane University and her law degree from Thomas M. Cooley Law School. Denaro fills the vacancy created by the resignation of Judge Jerald Bagley.

Judge Andrea Ricker Wolfson, 45, of Miami Beach, is a county judge for Miami-Dade County, and previously served as an Assistant State Attorney/Special Assistant U.S. Attorney for the Eleventh Judicial Circuit Court. She received her bachelor’s degree from the University of Notre Dame, her master’s degree from Southern Illinois University at Edwardsville, and her law degree from Chicago-Kent College of Law. Wolfson fills the vacancy created by the resignation of Judge Antonio Marin.

Judge Renatha Francis, 40, of Miami, is a county judge for Miami-Dade County. She previously practiced with Shutts & Bowen, LLP, and served as an attorney for the First District Court of Appeal. She received her bachelor’s degree from the University of the West Indies and her law degree from Florida Coastal Law School. Francis fills the vacancy created by the resignation of Judge Sarah Zabel.

Governor Scott said, “Hurricane season begins this week, and while we are always working to make sure Florida is prepared, we are also working to help our neighbors in Puerto Rico. At Governor Ricardo Rosselló’s request, I am proud to be in Puerto Rico for the sixth time since Hurricane Maria’s devastating impact to continue working with him and Lieutenant Governor Luis Rivera-Marin to offer assistance and guidance on their ongoing recovery. We will keep fighting to help our friends in Puerto Rico rebuild, recover and be ready for this year’s hurricane season.”

·        On October 5th, the Governor entered into a host-state agreement with FEMA – Florida is the only state willing to enter into this type of agreement to help families displaced by Hurricane Maria.

·        On October 30th, the Governor’s office sent a letter to the Office of Management and Budget. See the letter HERE.

·        On November 3rd, Governor Scott led a delegation of Florida utility providers to Puerto Rico at the invitation of Governor Ricardo Rosselló.

·        On March 5th, Governor Scott traveled to Puerto Rico to meet with Congresswoman Jenniffer González-Colón and attend the Puerto Rico State of the State Address.

·        On April 18th, Governor Scott met with Congresswoman Jenniffer González-Colón in Washington D.C. to discuss how Florida is working to help Puerto Rican evacuees in the state.

·        On April 18th, Governor Scott also spoke with FEMA Administrator Brock Long to discuss the FEMA Transitional Sheltering Assistance (TSA) program and the importance of keeping the FEMA case managers the Governor previously requested on the ground across the state.

Here’s what this round of grantees are saying:

Dr. Jim Richey, President of Eastern Florida State College said, “We’re very grateful to Gov. Scott for his efforts to provide the grant. It will play a significant role in helping us educate and train a new generation of high-tech workers for business and industry in Florida, and for companies launching a new era of human spaceflight from NASA’s Kennedy Space Center. We look forward to working closely with Daytona State College to ensure the initiative is a success.”

Joe Pickens, President of St. Johns River State College said, “St. Johns River State College appreciates the funding received from the Florida Job Growth Grant Fund and is honored to be one of the recipients. The grant will support the establishment of a new Engineering-Advanced Manufacturing program that was designed in partnership with our regional businesses to help meet their demand for a trained and skilled workforce to support the production and automation needed in today’s advanced manufacturing environments. This initiative demonstrates our strategic commitment to build sustainable, high skilled/high wage opportunities for the citizens and businesses of Northeast Florida, further diversifying our local and state economy.”

Ken Doherty, Chairman of the Charlotte County Commission said, “Florida Job Growth Fund grants are awarded to a limited number of applicants. This grant shows that Gov. Scott and his team are believers in the economic potential of Charlotte County. We are proud of our strong working relationships with the state and sincerely appreciate being selected for a grant of this magnitude.”

Kevin E. Hyde, Interim President of Florida State College at Jacksonville said, “We are grateful for this grant and our partners who allow us to further our workforce development initiatives in these key areas of opportunity. Many thanks to Governor Scott, the Florida Department of Economic Opportunity and Enterprise Florida for entrusting us with this award to build more students’ learning and employment opportunities and come closer to closing the talent gap in the manufacturing and logistics industries.”

END_OF_DOCUMENT_TOKEN_TO_BE_REPLACED

Today, Governor Rick Scott visited Hall Hardware in West Palm Beach, where he spoke about the beginning of the 2018 Hurricane Season and how important it is to be prepared. He highlighted the disaster preparedness sales tax holiday that will begin this Friday, June 1st and go through June 7th. During this holiday, Floridians will not pay sales tax on flashlights, batteries, generators, and other critical supplies needed to stay prepared during a disaster.

To see a list of disaster preparedness items that are tax free June 1st through 7th, CLICK HERE.