You are here: Home / Archives for Government

Representative Bruce Antone, Chairman of the Florida Legislative Black Caucus, joined fellow Democratic lawmakers at the Florida Capitol Wednesday to criticize Republican efforts to subvert the will of Florida voters by imposing onerous court fees on felons seeking to have their voting rights restored. END_OF_DOCUMENT_TOKEN_TO_BE_REPLACED

In partnership with the Florida Coalition to Prevent Gun Violence and March For Our Lives, students from across Florida arrived at the state Capitol to voice their opposition to Senate Bill 7030 and House Bill 7093 on Wednesday. END_OF_DOCUMENT_TOKEN_TO_BE_REPLACED

WHAT: In celebration of Earth Month, Environment Florida Research & Policy Center will hold a “Renewable Energy Roundtable” at Florida State University to discuss the technology, infrastructure and policies needed to transition to a society completely powered by renewable sources. END_OF_DOCUMENT_TOKEN_TO_BE_REPLACED

Volunteer Florida and Uber announced that the fourth annual Suits for Session service project will be held on the Second Floor Rotunda at the Florida Capitol on Thursday, April 11, 2019 from 9 am to 5 pm (ET). END_OF_DOCUMENT_TOKEN_TO_BE_REPLACED

The Board of Directors for Enterprise Florida, Inc. (EFI) met Tuesday on the campus of Florida A&M University to map future initiatives and opportunities. Governor Ron DeSantis, chairman of the Board, addressed directors on his vision for future economic growth and opportunities.

“I enjoyed addressing the board of Enterprise Florida to discuss ways we can continue to increase opportunities for Floridians,” said Governor Ron DeSantis. “The private sector plays an integral role in our success and I appreciate the work Enterprise Florida does to drive business to our state.”

“Florida’s future is bright, our governor is bold, and Enterprise Florida is ready to be the go-to hub for the insight and intelligence we will need for the economic growth and diversification that our citizens deserve,”said Joe York, Vice Chairman of the Enterprise Florida Board of Directors. 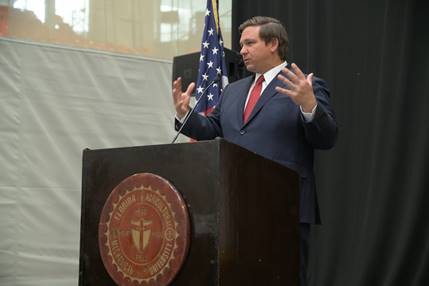 The Board also received updates on Opportunity Zones and EFI strategies for financial services and aviation/aerospace industry job creation in Florida.

“As we sit here at the end of the first quarter in 2019, we are a better organization with a distinct mission and we aim to keep getting better,” said Jamal Sowell, President and CEO of EFI. “Governor DeSantis is committed to undertaking some pretty bold ventures on behalf of Floridians, and EFI is orienting itself to execute his strategy.”

About Enterprise Florida
Enterprise Florida, Inc. (EFI) is a partnership between Florida’s businesses and government leaders and is the principal economic development organization for the state. EFI facilitates job growth through recruitment and retention; small business growth through international trade and exporting programs; promotion of sporting events; promotion and protection of Florida’s military bases; and capital funding programs to assist small and minority businesses.

“I am pleased to appoint Major General James Eifert as the next Adjutant General of Florida,”said Governor DeSantis. “As a veteran myself, this is a responsibility I take seriously as I know the importance of strong leadership in our military. General Eifert is poised and ready to lead the Florida National Guard and I am confident he will succeed as our next TAG.”

“I thank Governor DeSantis for expressing confidence in me in assuming this important role,”said Major General Eifert. “This is truly a great honor. Along with the 12,000 soldiers, airman and civilians of the Florida National Guard, I look forward to proudly serving the people of Florida as Adjutant General.”