You are here: Home / Archives for attorney general

Leading Republican candidate for Attorney General Ashley Moody today announced the endorsement of the Florida Police Chiefs Association (FPCA) in the race to become Florida’s next Attorney General. The FPCA is the third largest state police chiefs association in the United States and composed of more than 1,000 of the state’s top law enforcement executives. END_OF_DOCUMENT_TOKEN_TO_BE_REPLACED 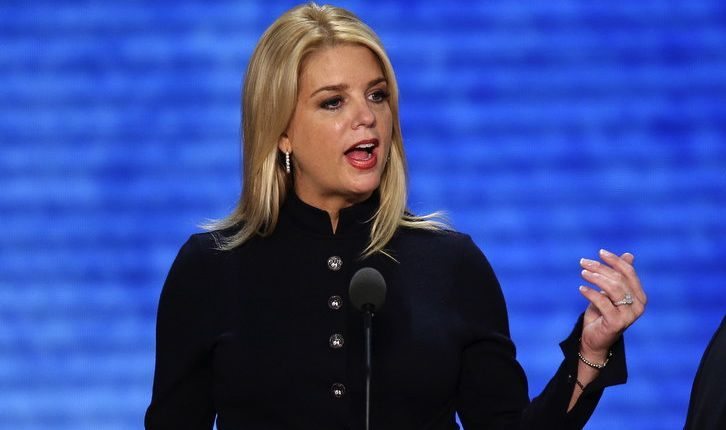 The Jacksonville State Representative pledges to fight for
small business owners and to protect the most vulnerable.

State Representative Jay Fant announced his candidacy for Attorney General of Florida. A Jacksonville native, Fant is serving his second term in the Florida House of Representatives. He announced at the Capitol in Tallahassee before leaving for a series of issue briefings in Tampa, Orlando, and Jacksonville.
“I am running because I believe so strongly in defending our constitutional rights and protecting Floridians from the excesses of the federal government,” said Fant. “But that can only happen if we make sure government is on the side of the people. We will fight to keep our business climate free and fair so entrepreneurs can pursue their dreams and create jobs. We will stand by our law enforcement community that works so hard to keep us safe.”
Fant graduated from the University of Florida School of Law in 1994 and served in several positions in his family’s business, one of the most well known and successful community banks on Jacksonville’s west side. Fant now serves as Chairman of Caroline Family Office.
In 2014, he was elected to District 15 in the Florida House of Representatives where he serves on several committees including Judiciary, Civil Justice, Government Accountability, Ways and Means, and Insurance and Banking.
“I will continue Attorney General Bondi’s fight against prescription drug abuse, human trafficking, and predators who target seniors and children. I will keep pushing back against the federal overreach that chokes our small businesses,” said Fant. “And the most vulnerable members of our society can count on me.”
Fant and his wife, Lauren, are the parents of two sons and two daughters.

State Representative Jay Fant will announce his candidacy for Attorney General of Florida tomorrow morning, May 9, at 9:30 a.m. at Waller Park on the west side of the Capitol, followed by issue briefings in Tampa and Orlando. He will conclude the day in his hometown of Jacksonville.
Representative Fant will be available to speak with media representatives at all venues:
Tallahassee
Who: State Representative Jay Fant
What: Announcement of his candidacy for Attorney General of Florida
When: Tuesday, May 9, at 9:30 a.m.
Where: Waller Park, west side of the Capitol, across from the Supreme Court of Florida
Tampa
What: Port of Tampa, discussion of commerce, homeland security, and immigration issues
When: 1:00 p.m.
Where: Gulf Marine Repair, 1800 Grant St., Tampa, FL 33605
Orlando
What: Tour of Restaurant Equipment World, roundtable discussion with small business owners
When: 3:30 p.m.
Where: Restaurant Equipment World, 2413 Forsyth Rd., Orlando, FL 32807
Jacksonville
What: Press availability
When: 7:05 p.m. (Representative Fant will arrive at 6:45 p.m.)
Where: Omni Jacksonville Hotel, 245 Water St., Jacksonville, FL 32202
For additional information or to R.S.V.P., please contact Lori Hutto at (850) 481-6186 or [email protected].

Attorney General Pam Bondi’s Medicaid Fraud Control Unit and the Lee County Sheriff’s Office today announced the second arrest of Ryan Todd Powers, 40, for grand theft of a motor vehicle.
Last month, following a MFCU investigation, authorities arrested the Lee County man on two counts exploitation involving an elderly person.  According to the investigation, Powers unlawfully obtained funds from an elderly relative suffering from physical limitations. In order to manage his relative’s affairs, Powers obtained a durable power of attorney on behalf of the victim. Using the power of attorney, Powers allegedly misappropriated the victim’s funds and property.
Since Powers’ release on bond, an ongoing investigation by MFCU’s Patient Abuse, Neglect and Exploitation Team discovered that Powers continued to use the power of attorney to sell a vehicle belonging to the elderly relative, again misappropriating property and funds for purposes other than the relative’s benefit.
In addition to the initial counts of exploitation, both third-degree felonies, Powers faces one count of grand theft of a motor vehicle, a third-degree felony. If convicted, Powers faces up to 15 years in prison and more than $20,000 in fines and restitution. The State Attorney’s Office for the 20th Judicial Circuit will prosecute the case.
The Florida Attorney General’s Medicaid Fraud Control Unit investigates allegations of patient abuse, neglect, and exploitation in facilities receiving payments under the Medicaid program. The Patient Abuse, Neglect and Exploitation Team plays a key role in helping to ensure that efficient and effective healthcare is being provided. Additionally, the MFCU investigates and prosecutes providers that intentionally defraud the state’s Medicaid program through fraudulent billing practices. Medicaid fraud essentially steals from Florida’s taxpayers. From Jan. 2011 to the present, Attorney General Bondi’s MFCU has obtained more than $500 million in settlements and judgments.

In the aftermath of the deadly thunderstorms that impacted the Southeast, Attorney General Pam Bondi is urging Floridians to be wary of storm-related scams and is offering tips to safeguard against potential scammers.
“While there is not an official declared state of emergency in Florida due to the recent severe weather, affected consumers may still be targeted by scammers,” said Attorney General Bondi. “In many parts of our state, trees are uprooted, homes and businesses are damaged and contractors and tree removal services are in demand, making conditions ideal for scams.”
After a severe and damaging storm, unscrupulous individuals will sometimes prey on those in distress. To safeguard against scams in the aftermath of a storm, consumers should follow these tips:

Consumers can report fraudulent activity by calling the Attorney General’s fraud hotline at 1(866) 9-NO-SCAM or by filing a complaint online at MyFloridaLegal.com.

Attorney General Pam Bondi and the Federal Trade Commission announced a settlement with several related debt relief and credit repair services companies and their principal. The settlement resolves allegations that Chastity Valdes and her companies, Consumer Assistance LLC, Consumer Assistance Project Corp. and Palermo Global LLC, engaged in unlawful debt relief operations targeting student loan holders. Among other things, the settlement bans the defendants from operating in the debt relief and credit repair industries.
In 2016, Attorney General Bondi’s Office and the FTC filed a joint lawsuit against Valdes and her companies, alleging the defendants took illegal up-front fees in return for their purported debt relief and credit repair services. According to the complaint, the defendants allegedly falsely claimed these services reduced consumers’ student loan debt and repaired consumers’ credit. The complaint also asserted violations of the Florida Deceptive and Unfair Trade Practices Act, the FTC Act, the Telemarketing Sales Rule and the Credit Repair Organizations Act.
As part of the settlement, the defendants are banned from selling debt relief and credit repair services and prohibited from making material misrepresentations about any products or services. The defendants are also barred from misrepresenting endorsements, profiting from consumers’ personal information and failing to dispose of personal information properly.
The order also imposes a judgment of more than $2.3 million, which will be suspended upon the surrender of virtually all of the defendants’ assets. If the defendants are found to have misrepresented their financial condition, the full judgment will become due immediately.
To view the stipulated order, click here.
To view the motion for preliminary injunction against Valdes and her companies, click here, and for the complaint, click here.

Attorney General Pam Bondi today presented a resolution recognizing January 2017 as Human Trafficking Awareness Month at a meeting of the Governor and State Cabinet in Tallahassee.

In addition to the Attorney General’s efforts through her Office of Statewide Prosecution to prosecute human trafficking crimes, Attorney General Bondi also chairs the Statewide Council on Human Trafficking. The Council builds on existing state and local partnerships working to combat human trafficking and serve victims. Law enforcement officers, prosecutors, legislators and experts in the fields of health, education and social services sit on the council.

Pursuant to that agreement, RJR and the other major tobacco companies agreed to make annual payments to Florida of several hundred million dollars, in perpetuity. The annual payments compensate Florida for the past and future public health care expenses from its citizens’ consumption of the settling defendants’ cigarettes.

RJR recently sold three of its most iconic cigarette brands, Winston, Kool and Salem, along with a legacy Lorillard Tobacco Company brand, Maverick, to ITG for $7 billion. These four brands accounted for approximately 17 billion cigarettes sold in 2016, eight percent of the domestic tobacco market.

RJR has refused to include the sales of these cigarette brands when making annual payments to Florida, despite not having been released from its payment obligations. ITG has similarly refused to make any payment to Florida even after agreeing with RJR to assume the payment obligations for these iconic brands. The exact same cigarette brands continue to be sold to Floridians, thus imposing the very public health care expenditures that the settlement payments are intended to compensate.

“The sale of major, pre-existing tobacco brands to another company for billions of dollars does not cause the payment obligations to vanish like a puff of smoke,” said Attorney General Bondi. “I look forward to the state obtaining prompt relief.”

According to the enforcement motion, both RJR and ITG are liable for millions of dollars of missed payments to Florida on these brands. The motion seeks the entry of an order requiring payment to Florida for the past and future sales of these cigarettes and directing RJR and ITG to provide the necessary information to accurately calculate the amounts owed pursuant to reporting requirements under the settlement agreement.

To view a copy of the enforcement motion, click here.

“Today, the Florida Supreme Court declined to review McCall v. Scott, a case dismissed by the lower court challenging the constitutionality of Florida’s Tax Credit Scholarship Program. I am pleased that the lower court’s decision will stand, and that this important program will continue to provide educational opportunities for children of families that have limited financial resources. Today is a great victory for our children.”