You are here: Home / Archives for Florida

Governor Rick Scott today announced that November 2018 marked 44 consecutive months of the Orlando area having the highest job creation in the state, adding 60,800 new private-sector jobs in the past year, making the total number of new private-sector jobs created in the Orlando area 315,400 since December 2010. END_OF_DOCUMENT_TOKEN_TO_BE_REPLACED

Floridians recently were surprised to learn that last year the number of children uninsured in our state increased for the first time since tracking began a decade ago. According to a recent report released by Georgetown University’s Center for Children and Families, the share of Florida children without insurance coverage rose from 6.6 percent to 7.3 percent. END_OF_DOCUMENT_TOKEN_TO_BE_REPLACED

Despite significant advances in technology and lowered costs, along with an abundant source of year-round sunshine, Florida continues to lag behind states such as New Jersey in the move to clean, renewable energy like solar power. Additionally, issues surrounding climate change and sea level rise pose a significant threat to Florida. END_OF_DOCUMENT_TOKEN_TO_BE_REPLACED 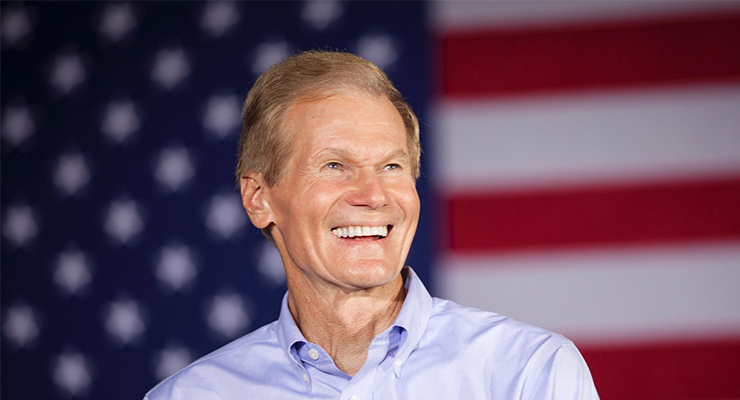 U.S. Sen. Bill Nelson (D-Fla.) today urged Senate Energy and Natural Resources Committee leaders to hold a hearing on legislation he filed last fall in the wake of Hurricane Irma that would require the federal government to set up fuel reserves on Florida’s east and west coasts that could be used in the event of another major storm hitting the state. END_OF_DOCUMENT_TOKEN_TO_BE_REPLACED

Governor Rick Scott today proclaimed June 12th as Pulse Remembrance Day in Florida in recognition of the 49 innocent lives lost in the horrific attack on Pulse Nightclub on June 12th, 2016. Gov. Scott is asking all Florida residents to pause for a moment of silence at 9:00 a.m. and is directing all state flags in Florida to be lowered to half-staff from sunrise to sunset tomorrow, June 12th, 2018. END_OF_DOCUMENT_TOKEN_TO_BE_REPLACED

The Washington Economics Group will announce the findings of an economic study, which affirms that restoring the eligibility to vote for Floridians who have made past mistakes would result in positive economic impacts to Florida taxpayers.  Dr. J. Antonio Villamil of The Washington Economics Group, who authored the study, will be available to media to announce the major impacts:

WHERE: RSVP to [email protected] to receive the call-in information

Amendment 4 restores the eligibility to vote of Floridians with felony convictions only after they complete all terms of their sentence and pay their full debt to society – including parole, probation, and restitution, if imposed by a judge. Those convicted of murder or felony sexual offenses will not be eligible under Amendment 4.

Pd. pol. adv. paid for by Floridians for a Fair Democracy, Inc.

Ahead of his planned visit to Israel, Gov. Scott proclaimed Monday as Florida’s Celebration of Israel’s 70th Independence Day, recognizing the close relationship between Israel and Florida. To read the proclamation, click HERE.

As announced on May 4, Governor Rick Scott will travel to Israel for the May 14 opening of the new United States Embassy in Jerusalem. The trip will mark the Governor’s third official visit to Israel. The most recent visit was in December 2017 where the Governor expressed his full support of moving the U.S. Embassy from Tel Aviv to Jerusalem. To view video of the Governor at the Western Wall expressing his support, click HERE.

On Sunday, May 13, Governor Scott will attend a dinner with the Friends of Zion Museum honoring the opening of the U.S. Embassy in Jerusalem.

Florida continues to lead the U.S. and its territories in the number of people killed and injured by exploding Takata airbags, according to new numbers released today by U.S. Sen. Bill Nelson (D-FL).

Takata airbag ruptures have been linked to three deaths and 83 injuries in Florida. Moreover, injuries in the state have risen by almost 400-percent since December 2014.

Puerto Rico, Texas, California and Georgia round out the top five with the most deaths and injuries from defective Takata airbags. Nearly three-fourths of all U.S. casualties occurred in the four states and the territory of Puerto Rico.

“These numbers show that we still have a huge problem with getting these dangerous airbags replaced and off our highways,” said Nelson, who serves as the highest ranking Democrat on the Senate Commerce Committee, which oversees the automakers. “Consumers should heed the recall warnings and get their vehicle repaired as soon as possible. Failure to do so could result in death or life altering injuries.”

Honda vehicles with defective Takata airbags accounted for all three deaths and 55 of the 83 injuries in Florida. Toyota ranked second with 13 injuries reported in the state.

The state-specific numbers were tallied from information provided to Nelson by the 19 automakers that use Takata’s non-desiccated ammonium nitrate-based inflators.

Nelson also reported on Friday that only 45 percent of the Florida vehicles under recall for Takata airbags had been fixed as of mid-April, according to data obtained from the Takata Independent Monitor. In total, 1.3 million recalled vehicles have yet to be repaired in Florida.

Release of the new numbers comes in advance of a hearing the U.S. Senate Commerce Committee will hold next week on the nomination of Heidi King to head the National Highway Traffic Safety Administration (NHTSA) which ordered the Takata recalls. Nelson intends to seek a commitment from King that, if confirmed, she will speed up efforts to get the exploding airbags replaced.

Consumers who wish to check whether their vehicles are under active recall due to defective Takata airbags can visit the U.S. government’s website at SaferCar.gov.

Following a report this morning that the State of Florida failed to properly maintain a background check database used to prevent someone with a known mental illness from buying a gun, U.S. Sen. Bill Nelson (D-FL) today called on the U.S. Department of Justice to step-in and provide the funding needed to fix the problem.

A copy of Nelson’s letter to DOJ is available here.

Below is a POLITICO article on the state’s failure to maintain the database, and here’s what Nelson tweeted about it today:

TALLAHASSEE — In Florida, a state with some of the nation’s worst mass shootings in recent years, nearly 20 percent of mental health records are entered late into a background check database, a long-running problem state law enforcement officials now acknowledge could lead to someone with a known mental illness buying a gun.

The lapse, which dates back to at least 2014, went unnoticed by state lawmakers and the governor’s office until POLITICO asked about the issue.

“The risk of late reporting of mental health records is that an individual who is prohibited from purchasing or possession a firearm may be approved at the time of the background check if the disqualifying mental health record is not available,” read Florida Department of Law Enforcement documents from last month that are part of an application for U.S. Department of Justice funding to help solve the problem.

The state agency is now asking for $94,880 from the Department of Justice to fund a pilot program in the Miami-Dade Clerk of Courts office. The money would fund a position to identify and enter “disqualifying mental health records within expected timeframes,” according to an outline of FDLE’s request, which was approved last month by the state’s Criminal and Juvenile Justice Information Systems Council. Clerks in each county are responsible for entering mental health records that would disqualify someone from buying a gun into the Florida Mental Competency application, which is overseen by FDLE.

The problem was first identified in a little-noticed 2016 audit focused on mental health records between June 2014 and February 2016. It found 17 percent of mental health records were “reported late.” Of the 5,771 records that were late-entered, which means one month after a person was found to have a serious mental illness or institutionalized, 225 were not entered for between 181 and 365 days, and 61 were not entered for between 366 and 525 days. Disqualifying information is flagged when a judge finds someone a danger to themselves or others, not guilty by reason of insanity, commits them to a mental health treatment facility involuntarily, or finds them incompetent.

In a follow-up done six months later, state auditors reported that in late 2016, counties began telling FDLE they were working to identify mental health records that would disqualify someone from buying a gun that were never entered into the database. As a result, Miami-Dade, Pinellas, and Putnam counties collectively found 300 that had not been submitted. The audit also noted that FDLE and state clerks are working on a multi-year program that will “greatly enhance the entry of records into” the mental health database.

Though the problem has existed since at least mid-2014, Gov. Rick Scott’s office and key lawmakers were not aware the problem had been flagged by state auditors until alerted by POLITICO.

“The Clerk’s Office never made us aware of this,” said McKinley Lewis, a Scott spokesman.

“The Clerks of Court in Florida are locally elected, and the governor expects them to prioritize their resources to quickly resolve this issue,” Lewis added. “FDLE continues to work with the Clerks to supply federal grant funding and ensure criminal justice databases are effectively utilized so law enforcement can work to keep Floridians safe.”

State Rep. Bill Hager (R-Delray Beach), who chairs the House Justice Appropriations Subcommittee, said “no” in a text message when asked if he knew about the late-filed mental health records. He did not respond to follow-up questions.

State Sen. Jeff Brandes (R-St. Petersburg), who is chairman of the Senate Appropriations Subcommittee on Civil and Criminal Justice, said he had just been briefed by staff on the issue recently.

“Mental health screenings as part of these background checks is extremely important to keeping firearms out of the hands of mentally ill individuals,” he said. “I’ve only recently become aware of the staffing shortages impacting those screenings. If a federal grant would help, then I’m encouraging FDLE to apply.”

Funding for state clerks has long been a budget battle. Officials with the Florida Court Clerks and Comptrollers, a state group that represents county clerks, blame budget reductions, not misplaced staffing priorities, for the late-filed mental health records.

“Funding reductions have been a concern for the past several years and we are working with the Legislature to develop a permanent and sustainable statewide funding solution that will address all necessary clerk functions including this one,” said Molly Kellogg-Schmauch, a spokeswoman for the statewide clerk’s organization.

The DOJ funding would be used to start a pilot program in just one of Florida’s 67 counties. When asked what is being done in other counties that have experienced delays, Kellogg-Schmauch only said “clerks follow a specific process and timeline to report these cases per statute.”

Neither the clerks or FDLE are aware of any situation where someone with a disqualifying mental health condition purchased a gun because of the delay.

Florida, though, is no stranger to mass shootings caused at the hands of gunmen who had interacted with the state’s mental health system. Nikolas Cruz, who in February gunned down 17 people at Parkland’s Marjory Stoneman Douglas High School, was interviewed by staff at a state mental health facility, which decided not to hospitalize him, according to a 2016 Florida Department of Children and Families report.

Cruz legally purchased the AR-15 he used in the attack in February 2017, and “no red flags were raised” during the purchase, according to attorneys for the South Florida gun store where the weapon was purchased.

“There were various questions that were asked of him for self-reporting, one of those questions was whether or not he had been adjudicated for mental illness, or whether you had been institutionalized,” Stuart Kaplan, an attorney representing the gun shop that sold Cruz the firearm, told NBC News after the shooting.