You are here: Home / Archives for Businesses

Governor Rick Scott and Volunteer Florida today thanked the following businesses for their generous donations to the Florida Disaster Fund, which was activated by Governor Scott to aid those impacted by Hurricane Michael. END_OF_DOCUMENT_TOKEN_TO_BE_REPLACED 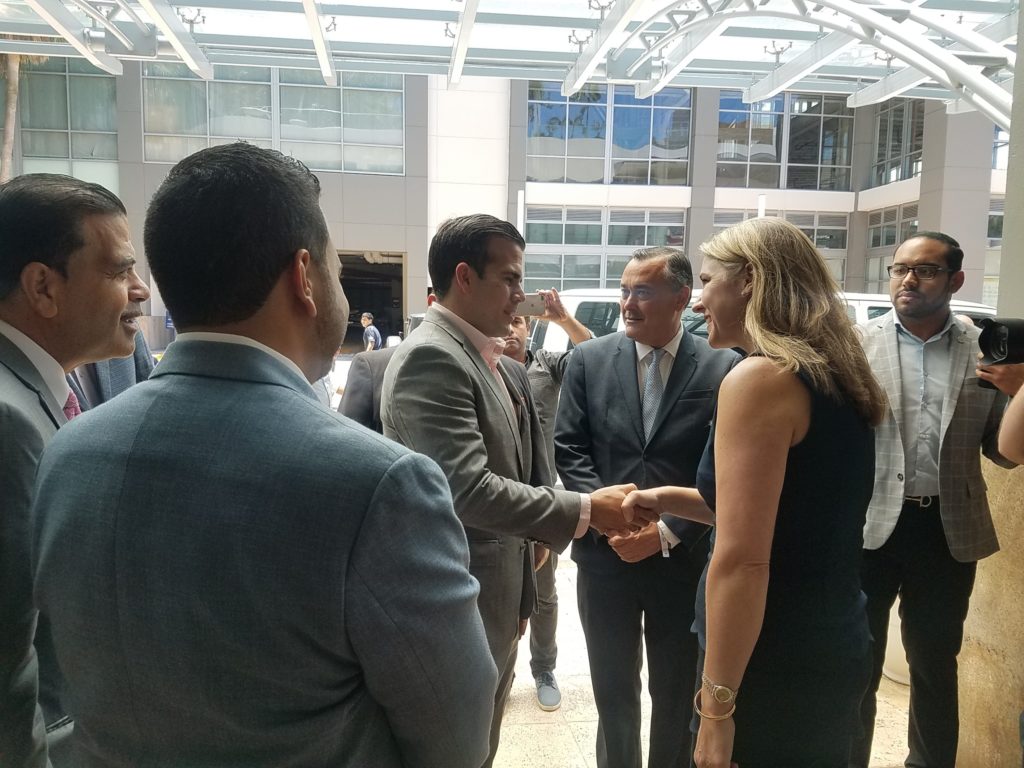 At Governor Scott’s direction, the Florida Department of Economic Opportunity’s (DEO) Executive Director, Cissy Proctor, traveled to Puerto Rico over the weekend. She was invited by Puerto Rico Governor Ricardo Rossello to meet with retailers in Puerto Rico. END_OF_DOCUMENT_TOKEN_TO_BE_REPLACED

Governor Rick Scott announced that Florida businesses have created 1,516,900 jobs since December 2010, including 8,300 private-sector jobs in April and 170,400 in the last year. Florida’s annual job growth rate of 2.3 percent continues to exceed the nation’s rate of 1.8 percent. Florida’s annual job growth rate has outpaced the nation for 72 of the past 73 months. The only month that Florida did not exceed the nation was due to Hurricane Irma. The Governor made the announcement today at El Meson in Orlando, a restaurant with four locations in Florida and 37 in Puerto Rico. The Governor visited the restaurant during his fifth trip to Puerto Rico.

END_OF_DOCUMENT_TOKEN_TO_BE_REPLACED

The month of October is recognized as Cyber Security Awareness Month, designed to raise awareness about cyber security and staying safe online. The Florida Office of Financial Regulation reminds all Florida businesses to engage in smart cyber security practices and to take steps to reduce the risk of becoming a victim of a cyber incident.
Typically, the purpose of a cyber breach is to steal or exploit information. As we have seen in recent months, large companies are targets of cyber attacks. But small businesses are not immune, potentially because they may have less security than a large company and they likely hold more digital information than an individual. Ensuring compliance with best practices for cyber security and reducing your risk is the best way to ward off a cyber threat.
If your organization is impacted by a cyber breach, make sure you understand your obligations to consumers under Florida’s Information Protection Act. The Florida Information Protection Act of 2014 was passed to better protect Floridians’ personal information by ensuring that businesses and government entities take reasonable measures to protect personal information and report data breaches to affected consumers.
Below are some resources to assist businesses in creating a cyber security policy and action plan.

Governor Rick Scott announced today that Florida businesses created 50,700 private-sector jobs in January, bringing the total number of new jobs added since December 2010 to 1,343,100. Governor Scott made the announcement at Herc Rentals Inc. which, thanks to the hard work of Enterprise Florida (EFI), is expanding its Lee County-based corporate headquarters, creating 122 new jobs.

Governor Scott said, “I am proud to announce that Florida’s private-sector businesses created nearly 51,000 new jobs in January. In the last six years, our state has added more than 1.34 million new jobs with help from our economic development organizations like Enterprise Florida that fight for new investment all across our state. Today’s announcement of Herc Rentals adding more than 120 new jobs would not have been possible without the hard work and collaboration of EFI. Unfortunately, politicians in the Florida House last week voted to kill our jobs program– threatening great jobs wins like Herc’s expansion in Bonita Springs. We will continue to fight for jobs and ensure Florida remains competitive for major jobs wins that provide opportunities for Florida families.”

For the 58th consecutive month, Florida’s annual job growth rate of 3.6 percent is exceeding the nation’s rate of 1.8 percent. In the last year alone, 260,600 new jobs were created by businesses across the state. Florida’s unemployment rate remained low at five percent in January.

Cissy Proctor, Executive Director of the Florida Department of Economic Opportunity, said, “After a very strong year of job creation in 2016, Florida businesses are doubling down on their investment in new jobs. In January, more than 50,000 new jobs empowered Florida families to achieve financial security. Florida must build on the momentum of the last six years by continuing to support economic diversification and job creation opportunities for all Floridians.”

Other positive economic indicators include:

The Florida Department of Juvenile Justice (DJJ) held a youth assembly to echo the message of The Facts. Your … END_OF_DOCUMENT_TOKEN_TO_BE_REPLACED

Sachs Media, Florida’s top PR firm for high-stakes challenges, has been named one of the Best Companies to … END_OF_DOCUMENT_TOKEN_TO_BE_REPLACED